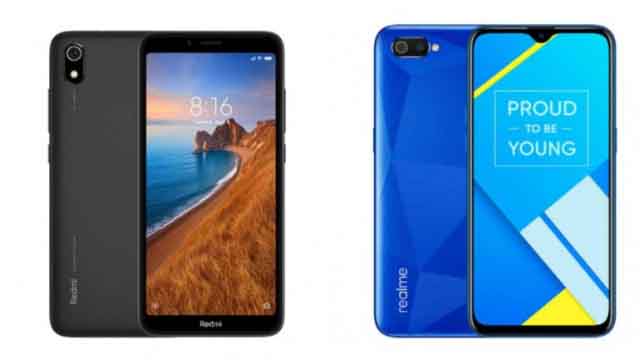 Xiaomi has recently launched Redmi 7a, its latest budget smartphone India. Starting at Rs. 5,999 this phone will directly compete with Realme C2 which also starts at the same price. Let’s see which is real Budget King offering the best value for money.

There is a huge difference in the screen size of both devices. The Redmi 7a comes with a 5.45 inches IPS LCD HD+ screen with 18:9 aspect ratio but the Realme C2 comes with a significantly bigger 6.1 inches IPS HD+ screen and Corning Gorilla Glass 3. Also, there is a waterdrop notch on Realme C2 while Redmi 7a doesn’t have any notch it comes with thick bezels at the top and the bottom.

Both devices run different Custom UI, Redmi 7a has MIUI and Realme C2 has Color OS, both come with Android 9 Pie. So far Realme is providing regular security patches and software updates while Redmi provides MIUI updates but mostly delays security patches. RAM management is slightly aggressive in Color OS so you may miss notifications from some apps but it will improve battery usage. MIUI, on the other hand, has Ads which cannot be completely disabled.

Both of them come with the 4,000 mAh battery and in terms of day-to-day usage both of them are very close to each other but due to smaller screen size, Redmi 7a can give about 20-30 minutes extra than Realme C2. Both devices can easily last for a full day on a single charge.

Xiaomi Redmi 7a comes with the single rear-facing 12MP camera and the front-facing camera is a 5MP shooter whereas Realme C1 has dual-rear camera setup, primary camera is 13MP and secondary camera 2MP for sensing depth and again the front-facing camera is a 5 MP. Having dual-camera Realme C2 is better and also there is portrait/bokeh effect with the rear camera which is not available on the Redmi 7a. Both can record videos in 1920 x 1080 pixels at 30 fps.

Chandrayaan-2 : What, Why, When, How and all the other things you need to know