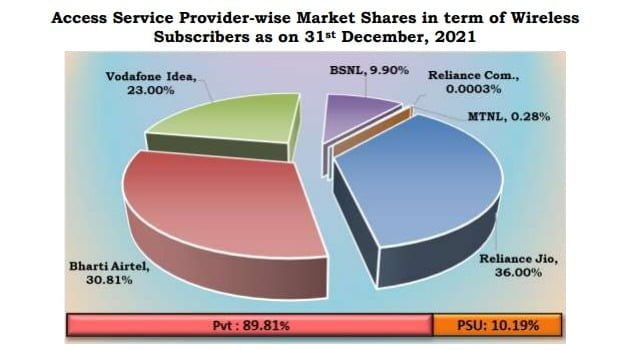 The fourth quarter of 2021 ended with Jio cleaning up its inactive wireless subscriber base in December with the deactivation of nearly 13 million subscribers, a trend that Jio began from last quarter, perhaps in an attempt to boost its ARPU figures in the quarterly report. Airtel and BSNL were the only operators to report a positive subscriber growth in the last month of the fourth quarter. In the wired broadband segment, Jio retained its lead, while Airtel stole a march over BSNL to become the second-largest operator by subscriber base.

Airtel and BSNL were the only operators to report a positive subscriber growth in the last month of the fourth quarter. The overall wireless subscriber base decreased sharply by 12.88 million.