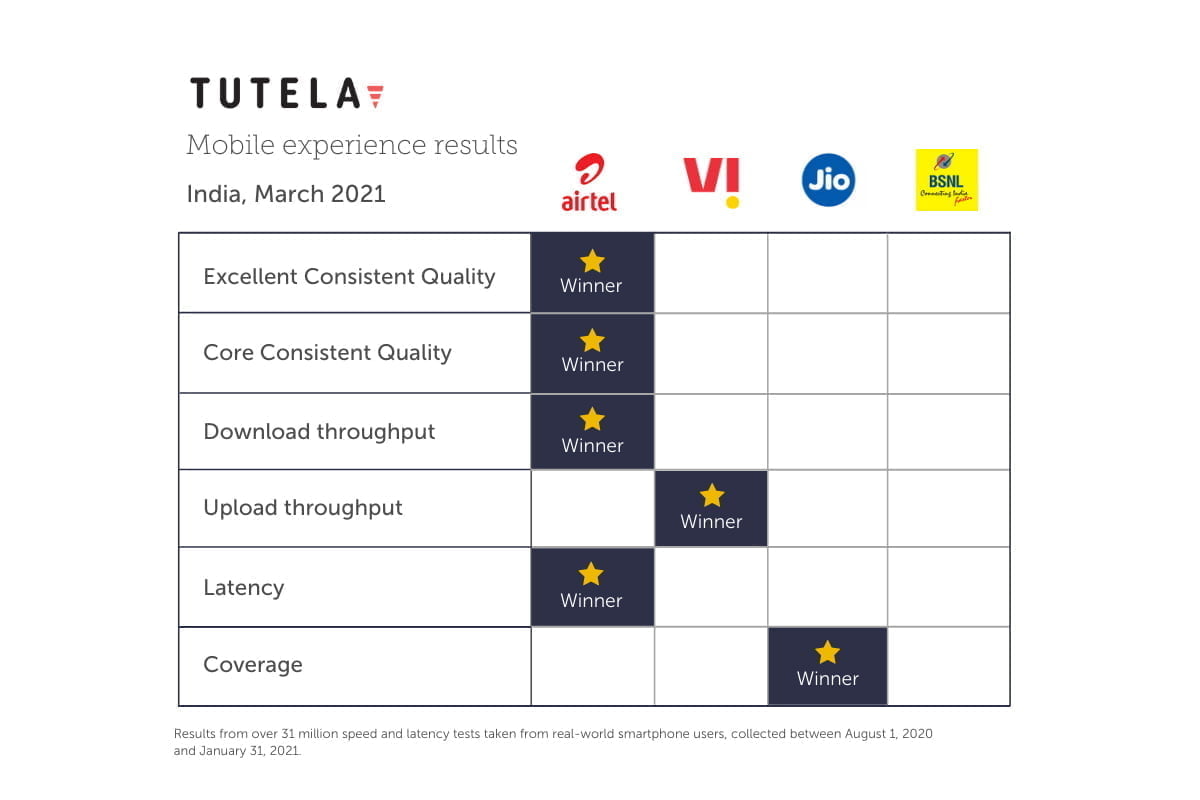 Tutela uses two key methodological components to compare user experience across operators: Consistent Quality and Common Coverage Areas. Consistent Quality is a measure to evaluate how connection networks enable users to do almost everything they want to do on their smartphones.

The company’s findings saw Airtel establish dominance among Indian operators winning first place in four out of two six categories that were tested. Airtel had the highest Excellent Consistent Quality at 56.6% as well as the highest Core Consistent Quality of 83.7% in Common Coverage areas across the country. Airtel also outperformed other operators for median download speeds and latency.

Jio ranked third behind Airtel and Vodafone Idea (Vi) in five out of six categories came first in the coverage category. The total coverage score for Jio was 595 with a significant difference compared to last-placed BSNL’s score of 316 which heavily relies on 3G technology.

In Common Coverage Areas across India, Airtel had the highest Excellent Consistent Quality at 56.6%. Vodafone Idea (Vi) was behind Airtel with 48.7% and Jio, third with 45.5%. BSNL was a distant fourth with a paltry 15% having a huge gap of 30% between the state-owned operator and third place Jio.

BSNL as usual last placed with a paltry median download speed of 1.8 Mbps.

Airtel again led the category with Airtel subscribers experiencing the most responsive network on average in Common Coverage Areas with a median latency of 24 ms, that is more than 50% lower than Consistent Quality’s threshold of 50 ms.

Vodafone Idea ranked second with a median latency of 26.8 ms while Jio followed at third position with 28.6 ms. BSNL was last placed once again with one-way latency of 48.5 ms – a whopping gap of over 24 ms between BSNL and Airtel. Tutela pinned BSNL’s latency performance on its reliance on 3G technology.

Jio outperformed other operators in this category in terms of the relative observed area with a total coverage score of 595 – which is overwhelmingly made up of 4G coverage and a virtually insignificant amount of older technology due to Jio roaming on old BSNL towers.

I dont think so. They have the poorest coverage in jammu city as well as jammu rural area.