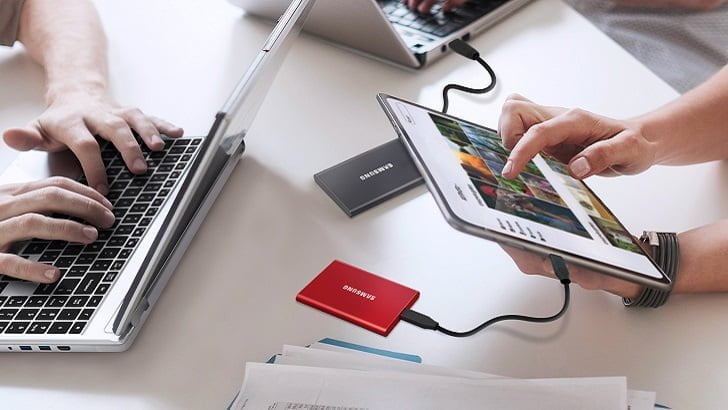 South Korean tech giant Samsung has launched its new range of storage devices – Portable SSD T7 and 870 QVO SSD on Friday in India with up to 8 TB of capacity and three years of limited warranty.

Samsung’s Portable SSD T7 features a sleek and compact design with the size of just a business card. It has a USB Type-C port with a USB 3.2 (Gen 2) standard with support for backward compatibility.

The maximum read and write speed of this SSD are 1,050 MB/s and 1,000 MB/s, respectively, nearly twice as fast as its predecessor, the Portable SSD T5 which offered 540 MBps data transfer speeds.

The 870 QVO SSD is a second-generation quad-level cell (QLC) flash drive featuring 9x layer V-NAND characteristics and an updated controller with an advanced ECC algorithm. It has endurance rating of up to 2,880 terabytes written (TBW).  This is successor for the 860 QVO series offering 13-per cent improved random read speed to enhance the daily computing experience.

This internal SSD has up to 8-terabytes of storage and offers sequential read and write speeds of up to 560 MB/s and 530 MB/s respectively. To maintain peak performance levels using a large variable SLC buffer, it has intelligent TurboWrite technology.