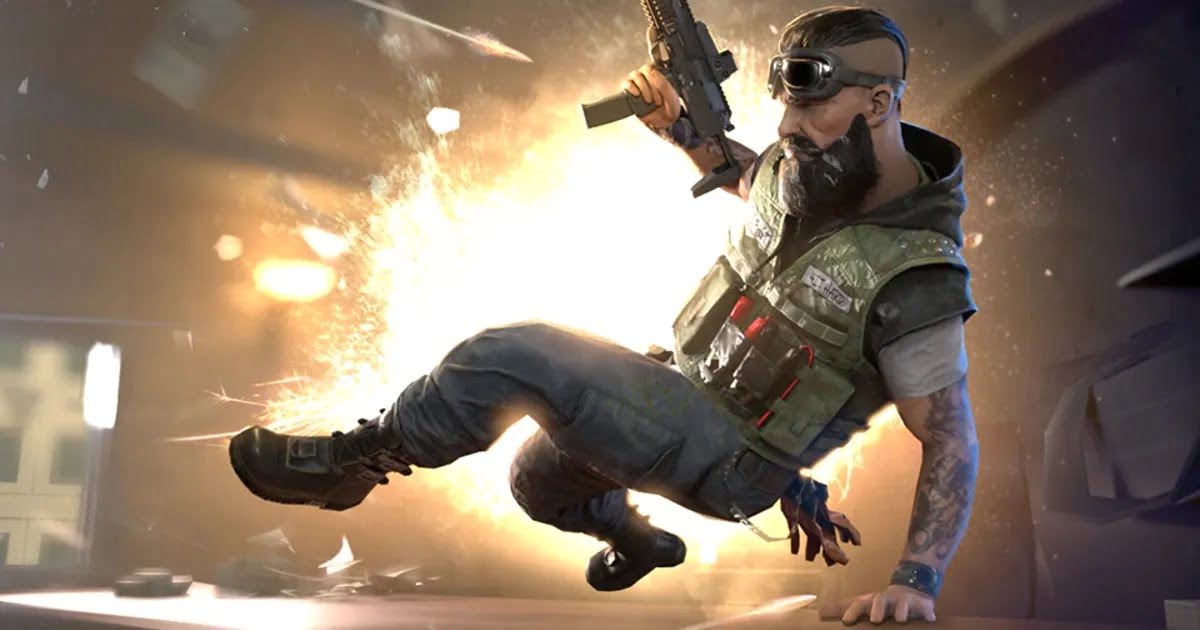 Ubisoft’s much awaited Rainbow Six: Siege mobile port, aptly called Rainbow Six: Mobile is now available in Closed Beta for Android devices in 7 countries, including India. The much awaited game looks to bring the competitive Siege experience on mobile devices. This is a closed beta build, and obviously has numerous glitches and lesser game modes.

Unlike CoD or BGMI which have a variety of playlists in its Multiplayer section, R6 Mobile only has 2 active playlists at a time. This could probably be because the game is in Beta, but it remains to be seen how many playlists do end up getting added to the game.

There are three maps available in the Beta – Bank, Border and Clubhouse. All three of them have minor changes on the maps compared to the PC version with the major highlight being reworked flow of the player spawn points on the Bank Map, headlined with the addition of the second tunnel in the Alley spawn. There are two game modes active in the closed beta – Secure Area and Bomb, and they work just like the PC version.

One small exception is that these modes are Best of 3 rounds on mobile, instead of the Best of 5 on the PC version. The game does have a Veteran playlist which features a Best of 5 mode, but that is active only on the extended weekends of Fri-Sun. When the Veteran playlist isn’t active, the second playlist is usually a training playlist with 9 other bots on any map. This feels a bit too restrictive and we should have had a custom game option, where we could explore the maps without time restriction. Hopefully this would arrive when the game releases, but for now we are stuck with 2 active playlists at a time.

During the beta, we have access to 8 attackers and 8 defenders, apart from the attack and defence recruit operator. All the operators work exactly like they do on the PC version and each operator has access to their unique ability, making each match more competitive. Like Siege, the mobile edition will require you to come equipped with the knowledge of the maps and counters to each operator. Apart from that, every operator also carries one primary weapon, one secondary gun and one secondary gadget, but unfortunately the load-outs of these operators cannot be customised at this moment.

Operator unlock mechanism is way different when compared to the PC counterpart. On the PC edition, you would require a certain amount of renown (in-game currency that can be earned by playing) or credits (premium in-game currency bought using real money). Whereas in the mobile edition, you need to obtain tickets to be able to play an operator in a round – very mobile like experience. Once you have used up enough tickets for an operator, you would unlock that operator permanently.

Unlike on PC, both attacking and defending operators are categorised into different rarity levels – Common, Rare, Epic and Legendary. As the rarity level increases, the chance of getting a ticket decreases, while the number of rounds needed for a permanent unlock increases. As of writing this article, the in-game store is not active to check operator ticket rates. However we expect this functionality to launch with the game’s release because no mobile game is complete without a micro-transaction experience.

Since this is the Mobile version of Rainbow Six Siege, it does not have the new home screen experience introduced with Year 7 of the parent game. Instead, it brings elements that are found on other mobile FPS games like Apex Legends Mobile, BGMI and Call of Duty: Mobile. Apart from the Play button, the other prominent thing you find here is the Battle Pass that contains 35 tiers of rewards. Unlike the PC battle pass, there are more items in the free tier of the Battle Pass compared to the premium one, which include platinum, avatar frames, a few ticket packs – which look like the PC’s alpha pack, and a few big ticket packs. If you acquire 1000 Platinum, you can unlock the Battle Pass Premium tier. The Premium tier gives you tickets of the Caveira operator, which so far during my gameplay has been very hard to acquire.

Then there’s the Settings section. This section feels very limited at this point because you cannot control the quality of the video output during a round’s gameplay. The graphics and animations feel a bit meh due to this on my Poco X3. The sensitivity controls are very elaborate, so is the gameplay HUD customisability. You can also control the scale of each of these HUD buttons, just like how CoD and BGMI allow.

While the core gameplay experience remains the same like PC, there are notable changes to a pre-round experience. Unlike on PC where all 5 players in a team can all pick up operators in realtime, while picking an operator you now have to wait for your turn to pick an operator. There’s no fixed pick number for a player throughout the match as this varies every round. In a round if you are having the last pick and the remaining 4 team mates have locked in the only operators you have unlocked, you would be forced to play with a recruit operator. I believe this is very unnecessary because Area F2 – a Siege ripoff for mobile released in 2020 and shut down within days – could always allow players in a team to pick up their operators at the same time. Moreover Call of Duty’s BR mode also allows players in a team to pick the player type at the same time.

There are two parts to a round, a preparation phase and the action phase which work exactly like the PC version. The 45 second prep phase is where defenders setup the bomb/secure area site covering the breakable soft walls with a hard reinforcement, while the attackers use their remote controlled ground-drones to scout the map for the sites and the operators being used. Then the action phase begins, with Attackers rappelling up the exteriors and breaking inside the map through windows, or by taking down the door barricades and destroying walls through operator gadgets. The defenders would be huddling at the objective trying to ensure that the attackers don’t control the bomb sites.

Gunplay mechanics are very similar to the PC version. You scope in through your ADS to aim and fire at the enemy. Since this is a mobile game, there’s no one-shot headshot mechanic like the PC version with most Assault Rifles and SMGs. Glaz’s sniper does have the one-shot headshot mechanic. You also can’t down the enemy player easily on this game. Unless it’s a sniper headshot, both allies and opponents can get downed and revived unless you double tap the fire button. Thankfully, the lean mechanism from the PC version works perfectly on mobile and hasn’t been taken away. You can shoot through certain walls and objects, similar to Rainbow Six Siege. Other buttons on the screen include the melee weapon, your gadgets, both your weapons along with other buttons in the HUD.

One extra addition to the mobile game is the Auto-Aim functionality. Once you hold down the Aim button, it will start firing as soon as it sees an enemy. While this is very convenient for newcomers who haven’t played Siege before, I’m not sure how this can be handled in a competitive environment. If a ranked playlist does eventually arrive, this feature should not be a part of it. Another minor addition to the game is the red highlight around the enemy player’s body. This is just like the initial days of Siege on PC, where you could see the enemy player’s name and a changed crosshair colour upon pointing the gun on them. This feature isn’t available in the Veteran playlist and should not be available in the ranked playlist, if it releases.

While this game is stable enough for a Beta version, it is not without any glitches though it should not bug you too much while playing a round. You will come across players posing like the statue in Rio de Janeiro during the end of round clip showing the play of the round. This clip seems to be very buggy in its current state. In one the rounds we played, I had killed 4 of the 5 enemy players – including a double kill in 2s – while one of my teammates killed the remaining person. I expected my kills to be shown in the end of round clip, however it is this teammate’s kill that got shown. Moreover my phone gets warm after a few rounds of gameplay, whereas CoD and BGMI don’t heat up my phone as bad as R6 Mobile. Hopefully this gets fixed at release.

Another glitch is when I remove my AirPods Max connected via wire to my Poco X3 during a round, the sounds go haywire. At times I don’t hear anything through the phone speakers when this happens. It is likely this also happens with Bluetooth headphones as well, though I haven’t tested my AirPods Max wirelessly on Android. Nevertheless, this shouldn’t be happening and we hope that this gets solved when the game releases.

So far, Rainbow Six Mobile beta has been successful in bringing Siege’s gameplay mechanics on the mobile, including the vertical plays on certain spots in the maps. Though I must mention that the number of operators in this beta is very limited and unlocking them is a very slow, and sometimes a boring grind. This maybe solved with the introduction of in-app purchases, but that will only degrade the experience.

In terms of the playlists, even the PC version has started to feel stale because of the lack of new maps as well as the limited amount of playlists: Ranked, Unranked, Quick Match and the newest TDM, which almost no one plays in the SEAS server. If the mobile version does not have unique playlists at release, I fear almost no one will make the switch from other competitive mobile games.

Nevertheless, this a good entry in the Rainbow Six series – even in its current state – trying to bring the Siege experience to more people around the world. If you’ve played Rainbow Six: Siege or Rainbow Six: Extraction before, this is one title that you’ll love playing. However if you’re playing this for the first time, you may have some difficulty going through the steep learning curve of this game.

The mobile version of Rainbow Six: Siege tries to replicate its PC counterpart, but is it worth your time?

First impressions of the Closed Beta of Rainbow Six: Mobile