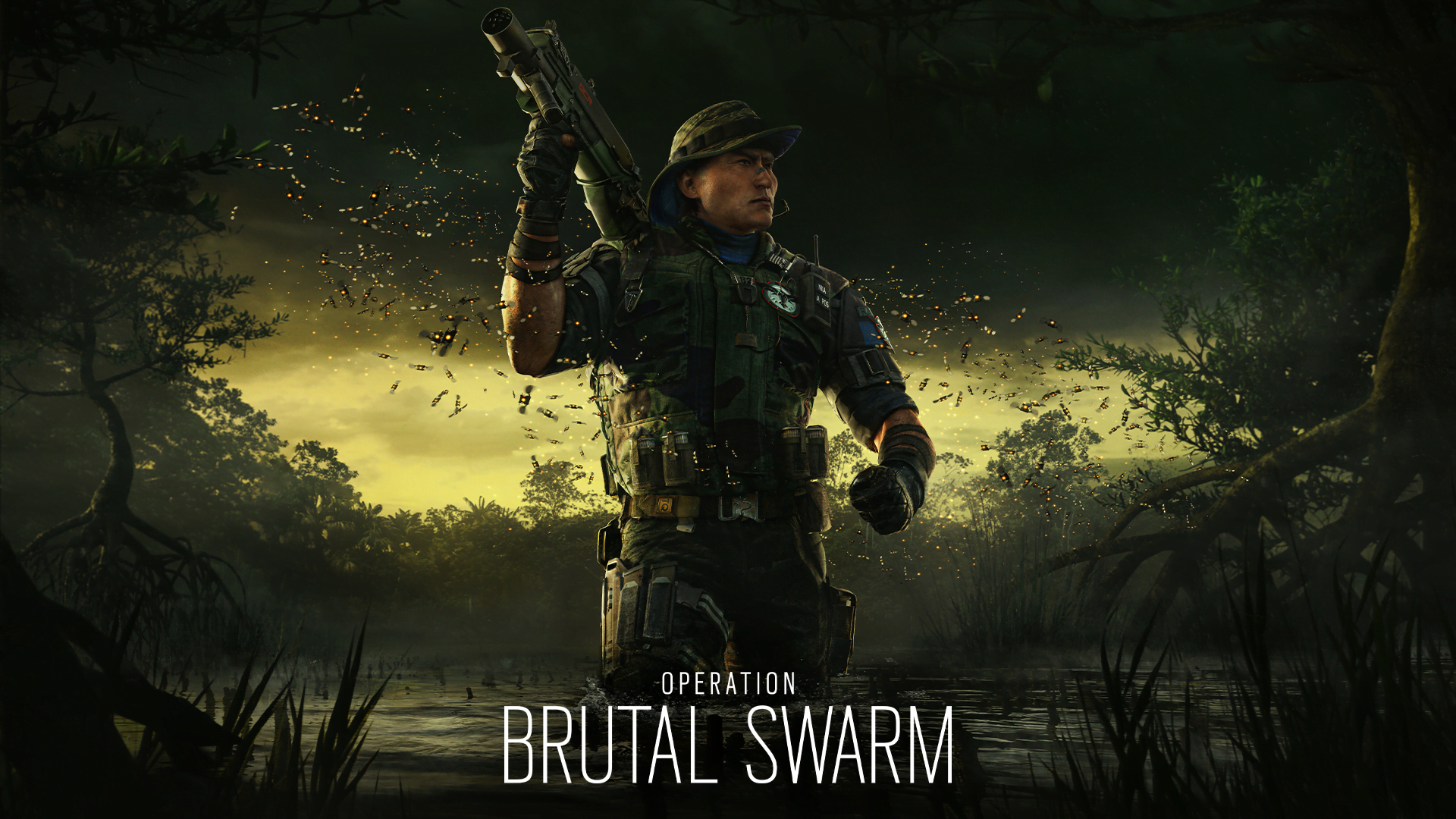 Ubisoft is really looking to revive its not-yet-dead game Rainbow Six Siege. After a successful first Season Demon Veil, followed up by an average Operation Vector Glare, the company is all set to continue try bringing in more players with Operation Brutal Swarm, the upcoming DLC in Year 7 Season 3.

It wouldn’t be a new season of Rainbow Six Siege without the introduction of a new operator. Charlie Tho Keng Boon aka “Grim” is the newest playable operator in the game who joins the attackers. Grim is a 3-speed, 1-armor attacker in the Nighthaven squad, whose primary gadget is the Kawan Hive Launcher – a handheld bazooka-like launcher that fires a canister, releasing a bee-like swarm of small mechanical bots. These bots reveal the defenders in or passing through the swarm, alerting all the attackers.

Defenders have a few gadgets available to counter this ability. The most notable of them being Mute’s jammer. As long as the canister is within the range of the Mute jammer, the canister cannot release. Similarly if any defender stinged by these mini drones walks into the range of a mute jammer, the drones fade away. This is very similar to the counter for Dokkaebi’s ability. Other operators that can counter this ability are Jager, Wamai and Aruni.

Grim can use the 552 Commando rifle or the SG-CQB shotgun as a primary weapon, with the P229 pistol available as a secondary, plus a choice between a breach charge or a claymore as a piece of equipment.

Stadium Bravo is the renamed version of the Stadium 2021 map. Usually the Stadium maps are only available for a few weeks as a part of the Road to SI event in S4 of a given year before the Six Invitational. However due to the new competitive map originally set to arrive this season got pushed back by a season, Siege has added this map into the Ranked map pool and will be available on all playlists.

“Stadium Bravo is a combination of Border and Coastline. The well-balanced sites and features are color coded and contain less clutter, making it feel different, and yet familiar,” according to the Y7S3 patch notes. It is important to note that Both these maps received big reworks in Year 6 after the Road to SI 2021 event, removing various chokepoints found in these maps. However, those reworks do not seem to be making their way to the Stadium Bravo map – most notably the rework to the smaller 2F Border site and the removal of steel bars from the 1F Kitchen Coastline site, which is very disappointing.

Operation Brutal Swarm brings a lot of balancing updates to the gunplay and gun recoil. The developers have finally looked into the imbalanced meta with respect to certain operators.

Vertical recoil has been reviewed on all weapons and adjusted to match the weapon’s expected power level. Moreover Vertical and horizontal recoil intensity increases during sustained fire bursts. The longer the burst, the stronger the recoil. The game lead says that this was done to reward players of skill than players who spray and pray for getting lucky. This should finally bring down the pick rate of overpowered operators like Finka and Zofia, thanks to the nerfs to their almost recoil-less LMGs. The recoil change is exciting in terms of what other weapons and operators it can bring to the fore, but it doesn’t feel direct enough given how stale the current meta is.

Additionally, the recoil values on console will now be adjusted separately from that of the PC values, so that the team can focus on the needs of console players more accurately. Moreover, all weapons have more attachment options. It means that any 2x scope can be equipped on any operator gun that had a 2x scope before. This feature will be available for both console and PC.

Brutal Swarm finally brings the ability to report suspect cheaters from Match Replay itself. This was a very long overdue change which should be welcomed by all. Players can now review the entire match in the Match replay and if a player suspects a cheater by looking at his activities, they can go to the scorecard, click on the player and report them from the screen that follows.

Additionally, Penalties for abusive text chat are now being implemented. This feature will also mute repeat offenders by default, and these players will have to be manually unmuted by teammates and other players for their messages to appear. Just like the sanctions introduced with Vector Glare, the muted chat sanctions are carried across multiple matches as well. There will be an early grace period when the feature is first launched in the season, so that players can adjust. When the system goes live later in the season, repeat offenses will result in an “active penalty” for 30 days. The players will now be able to view the sanctions applied on them on clicking of a button on the home screen.

Map ban phase for Ranked and Unranked playlists now display five maps instead of three. This is a very welcome change as there is a perception of staleness after newer/reworked maps are getting consistently banned in the Map Ban phase, thereby leading to a stale gameplay around the highly picked maps, most notably Clubhouse, Coastline and Border. Although this does not directly solve the newer maps getting banned, it should ensure that the map getting chosen is no longer the same one consistently.

Such changes can go a long way in reducing the toxicity in the game, although there is a feeling that these changes might have come too late, given the perceived general staleness of the game coupled with the falling average player count. There was also no announcement about any improvements to the Anti Cheat experience as well, the unavailablity of which has caused “swarms” of cheaters joining player matches.

Here are some other changes being made to Rainbow 6 Siege with the release of Operation Brutal Swarm:

Year 7 Season 3 launches with Operation Brutal Swarm on the live servers on September 6th, while the Test server for the new season is expected to go live tomorrow, unless there are any blockers.

House of the Dragon Review: The noble prequel series packs the granularity of the Game of Thrones