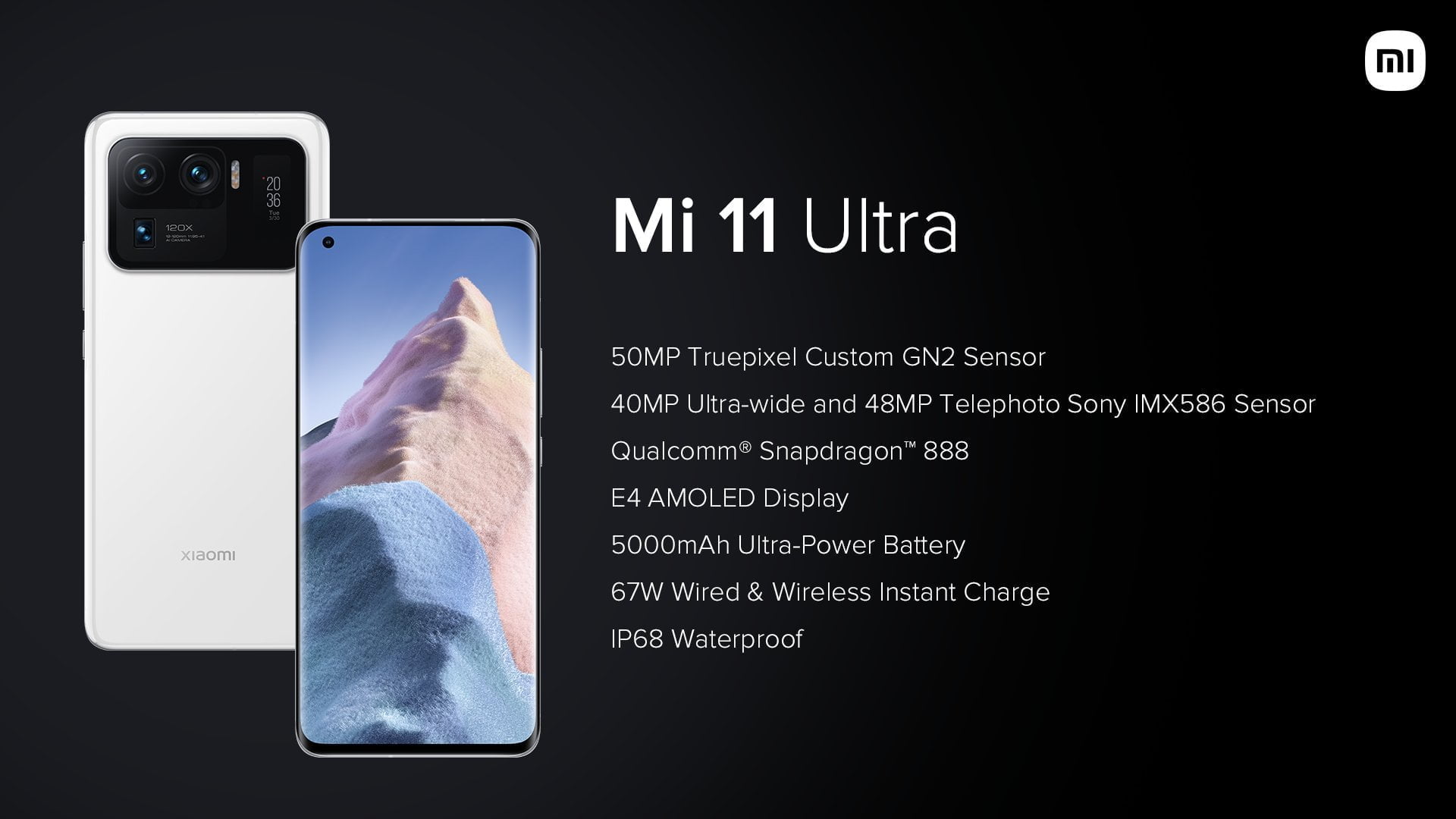 After launching the Mi 11 series worldwide, Xiaomi has finally launched the Mi 11 Ultra in India, along with Mi 11X and Mi 11X Pro. This is the second smartphone series to have the Snapdragon 888 flagship processor after the OnePlus 9 Series.

The Mi 11 Ultra features two screens, one on the front like a regular smartphone display, and another one sits right besides the camera module. The front screen on the phone features a 6.81-inch punch-hole AMOLED display having WQHD+ resolution at 20:9 aspect ratio, all protected by Gorilla Glass Victus. The rear display features a 1.1-inch AMOLED display with a 294×126 resolution. This display can be used a mirror/viewfinder, it will also show notifications, let you control music, show battery levels, and more. Like other flagship smartphone launches in 2021, the Mi 11 Ultra’s front display features a Variable Refresh Rate technology, which can automatically vary based on the content being displayed on the screen. While the phone is set to FHD+ resolution at 60Hz refresh rate by default, at the 120Hz setting the phone will vary its refresh rate between 30 and 120Hz. The phone enjoys a peak 1700 nits brightness, making sunlight legibility very easy and also brings in HDR10+ support, making content viewing very dynamic.

The phone features the latest Qualcomm flagship – Snapdragon 888 which also brings the Adreno 660 GPU. It carries a 5000 mAh battery with 67W wired and wireless charging support. The phone also features a 67W charging adapter. The phone runs MIUI 12 on top of Android 11 and features WiFi 6E along with Bluetooth 5.2 and IR blaster. The Xiaomi Mi 11 Ultra has a ceramic back and comes with an IP68 rating for dust and water resistance. The dual stereo speakers on the Mi 11 Ultra are powered by Harmon-Kardon.

The camera module on the phone stands out in comparison to other phones. It is the amongst the largest camera modules, and in Manu Kumar Jain’s words, “Mi 11 Ultra can bridge the gap between smartphones and DSLR”. The phone features 3 rear cameras. The primary lens is a 50MP shooter having the Samsung GN2 flagship sensor with an f/1.95 aperture. This module also has OIS present along with Auto-Focus and dToF sensor. The second camera is a 48MP ultra-wide lens paired with a Sony IMX586 sensor. This one has an aperture of f/2.2 with PDAF and a 128-degree field-of-view, one of the highest in the smartphone industry. The third sensor is a 48MP telephoto lens paired with a IMX586 sensor having f/4.1 aperture. This one also has PDAF along with OIS, and can handle 5x optical zoom, 10x hybrid zoom and upto 120x digital zoom. There’s also a 20MP selfie camera on this phone. The rear cameras also supports HDR10+ video recording at [email protected] as well as [email protected]

Xiaomi launched two phones in this series today – the regular Mi 11X and the Mi 11X Pro. Both phones are rebranded Redmi K40 series and are made in India for the world. Both phones feature the same 6.67-inch FHD+ display with a constant 120Hz refresh rate, but have differences in their camera configuration as well as the processor. While the Mi 11X Pro features the same Snapdragon 888 chipset like the Mi 11 Ultra, the Mi 11X features the lesser expensive Snapdragon 870 processor, putting it on par with the OnePlus 9R. Both phones also run MIUI 12 on top of Android 11 and are backed by 4520mAh batteries with support for 33W fast charging.

Both Mi 11X phones feature 3 rear cameras and also bring a 3rd microphone besides the camera lens. The main camera on the 11X Pro is a 108MP Samsung HM2 sensor which results in an output of 12MP after pixel binning 9 sensors into 1. This lens is capable of shooting 4K video at 60fps as well as 8K video. Unlike the flagship Mi 11 Ultra, this one does not shoot in HDR10+. The secondary lens is an 8MP ultra-wide sensor with a 119 degree FoV while the third lens is a 50mm macro lens at 5MP. It also features Night Mode video shooting with 6 different effects, that can be applied across the 3 cameras. On the front, the Mi 11X Pro features a 20MP selfie camera like the Ultra.

The Mi 11X also features the same camera configuration as the Pro variant, but it does not feature the Night Mode Video shooting and its primary camera is the 48MP Sony IMX582 camera.

The Mi 11 Ultra on the other hand is available only in one variant – with 12GB RAM and 256GB storage priced at Rs. 69,999 – the company’s most expensive phone ever in the Indian market – which is on par with the price of OnePlus 9 Pro.