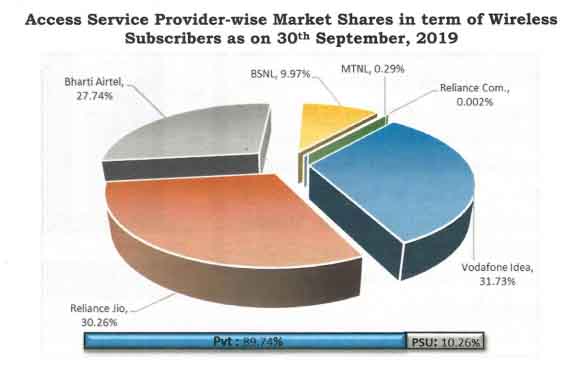 TRAI has released its telecom subscription data for the month of September 2019 which reveals that in the wireless segment Reliance Jio is leading with 6.9 million new subscriber additions followed by BSNL which has added 0.7 million new subscribers while Bharti Airtel has lost 2.3 million subscribers and Vodafone Idea has lost 2.5 million subscribers. with this Vodafone Idea continues to remain the market leader by subscriber market share of 31.73% while Jio retains its second spot with 30.26% market share, followed by Airtel with 27.74% and BSNL trailing behind with 9.97%. With this, the 3 private telcos dominate 90 % of the market whereas the 2 PSUs control only 10%.