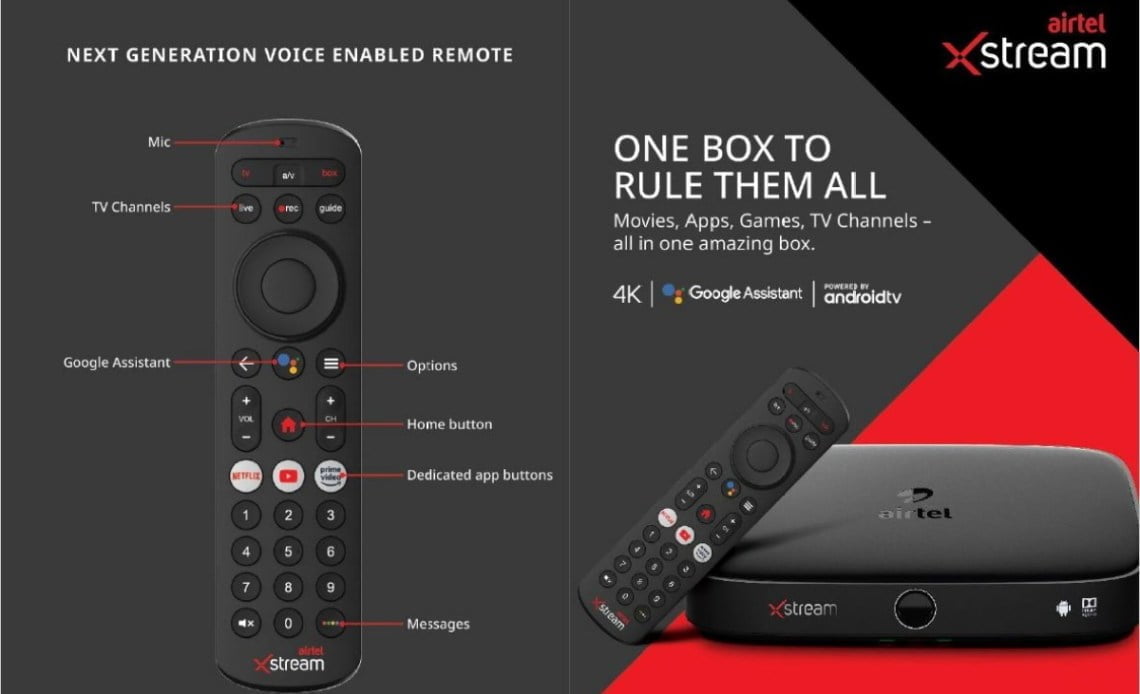 Rs 1500 refundable Security Deposit; STB to be repossessed on the failure of minimum recharge for 3 months

Within a day after we covered the exclusive pre-launch unboxing look of Tata Sky Binge+, Bharti Airtel’s Digital to Home (DTH) arm Airtel Digital TV ramped up the competition with the roll-out of its Xstream Thanks Offer wherein it offered Airtel Xstream Box to Airtel Thanks customers at a discounted rate of Rs 2249. On the day Dish TV launched ‘d2h stream’, Airtel has once again sounded the bugle with the introduction of ‘One Airtel Plan’ wherein it is providing Airtel Xstream Box on a Rs 1500 refundable security deposit.

According to the listing on the Airtel website, the STB will be available for continued use of the subscriber who opts for a minimum subscription pack of Rs 360 per month.

The STB will also have to be in a completely working condition along with compliance with other terms and conditions for the return of the STB.

The set-top box will come with a warranty of 1 year. Post expiry of the warranty, Airtel will swap the box with a similar STB for non-interruption of service in case of repair at the payment of visiting charges.

Failure to purchase a subscription for a continuous period of 3 months will lead to repossession of the STB by Airtel. In such an event, Airtel will uninstall the STB, whose charges will be borne by the subscriber. Post-inspection of STB & CPE for damage & working defects, the refund of the security deposit shall be processed in 10 working days in the NEFT number provided by the subscriber at the time of activation of the account.

The set-top box can only be used for domestic purposes and not for commercial purposes. It should neither be used in a public place or be accessed outside the installation address or outside the national territory of India.

The subscriber will have no right to sell, lease or assign the STB with Airtel entitled to take necessary action including suspension of DTH services on the STB, forfeiting the refundable security deposit and exercise any other recourse or remedies in the event of a breach of terms and conditions.

With the Xstream Thanks offer currently continuing in the parallel, the One Airtel plan is another attractive proposition for new users looking to buy android STB. Airtel has continued its aggressive marketing of ‘Xstream’ brand with continue promotion through exciting offers.