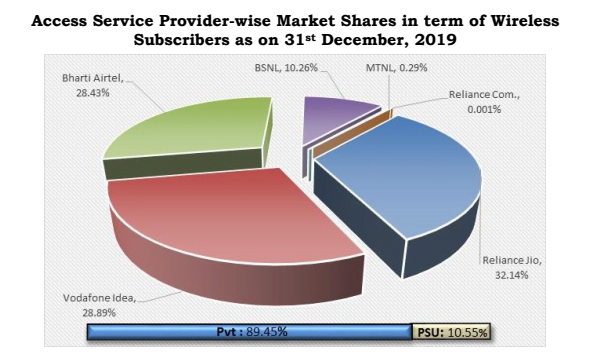 Reliance Jio, India’s largest operator by subscriber and revenue market share has seen a sharp decline in the new wireless subscriber additions in the month of December 2019 on account of tariff hike which came into effect earlier that month. The operator added only 82,308 new subscribers as opposed to 5.6 million in November.

The PSU operators BSNL and MTNL combined still dominate a lion’s share of the wireline telephony market with their combined share being 60.47% whereas that of all private operators put together is 39.53% where Bharti Airtel leads the race with 20.52% and newcomer Reliance Jio who recently launched its Jio fiber commercially, now commands 5% of the wireline customer market share.

Broadband is considered when the speed offered is higher than 512 Kbps irrespective of it being a wired or wireless connection. When considering the combined broadband market share, Reliance Jio leads with 56.03% market share followed by Bharti Airtel at 21.21% and Vodafone Idea at 17.89% whereas BSNL trails behind with only 3.62% market share.