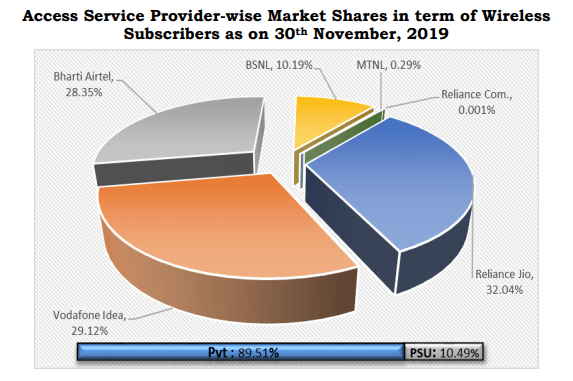 The PSU operators BSNL and MTNL combined still dominate a lion’s share of the wireline telephony market with their combined share being 61% whereas that of all private operators put together is 39% where Bharti Airtel leads the race with 20.24% and newcomer Reliance Jio who recently launched its Jio fiber commercially, now commands 4.81% of the wireline customer market share.

Broadband is considered when the speed offered is higher than 512 Kbps irrespective of it being a wired or wireless connection. When considering the combined broadband market share, Reliance Jio leads with 56% market share followed by Bharti Airtel at 21% and Vodafone Idea at 18% whereas BSNL trails behind with only 3.4% market share.