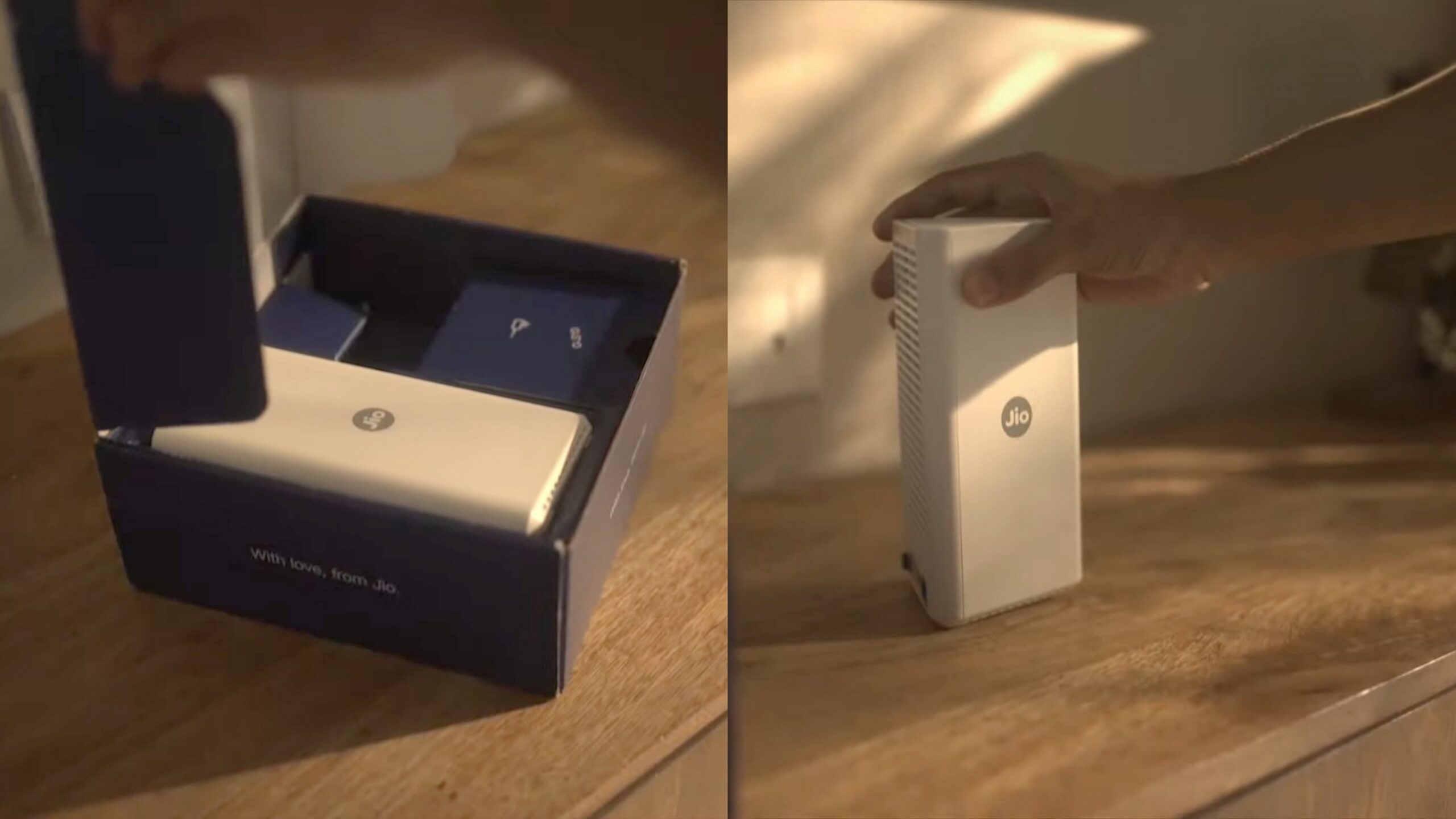 Akash Ambani who now heads Jio Platforms unveiled an upcoming solution for home broadband users who for some reason cannot avail of the company’s traditional fiber broadband services, a new device dubbed as Jio AirFiber Home Gateway which is a plug-and-play 5G based WiFi hotspot device. In a short demo video, Ambani showcased how the home gateway is a truly wireless solution and can be plugged in any corner of the house as per the consumer’s needs and 5G coverage within their premises.

The AirFiber gateway will support all the 5G bands (Sub-GHz, C-band and mmWave) that Jio bought in the recent auction and will also support carrier aggregation to further enhance the bandwidth and peak speeds. The device would be network locked and would work only with an active Jio 5G sim. The device may have an inbuilt battery in addition to the AC power supply, which may ensure that the wifi network doesn’t get interrupted for some time in the case of a power outage.

The video did not reveal the details about pricing or availability of the home gateway, but taking into consideration the 5G launch timeline revealed by senior Ambani, we can guess that this wifi hotspot will also share the same release timeline in the respective cities and towns across the country. The pricing of the gateway would also be pocket friendly, looking at the history of previous JioFi devices launched by the operator where it subsidises the cost of hardware since the device is network locked.

In India, right of way is still a major hurdle which has prevented operators like Jio and Airtel from connecting the mass of households with wired broadband. Laying of fiber along the city roads is a costly affair and connecting individual households again requires lots of permission from the respective housing societies which delays the process further. Jio AirFiber is aimed at overcoming these shortcomings of traditional fiber and expanding the reach of the home broadband segment exponentially without much capital-intensive expenditure.

Jio’s 5G network has the bandwidth capacity where it can support the home broadband needs like simultaneous 4K streaming on smart TVs just like fiber broadband which is why it is termed AirFiber. Jio may offer tariff plans for the home gateway at par with fiber broadband or slightly higher, given the convenience of being a portable service, but definitely much less than the existing 4G tariffs on JioFi given its bandwidth constraints. It remains to be seen if the Sim in the home gateway comes bound to the device or remains usable on other 5G compatible devices as well.

Everything you need to know about Jio Cloud PC

Jio AirFiber can be the game changer if its not a gimmick..

It won't work like a wired one that's for sure...