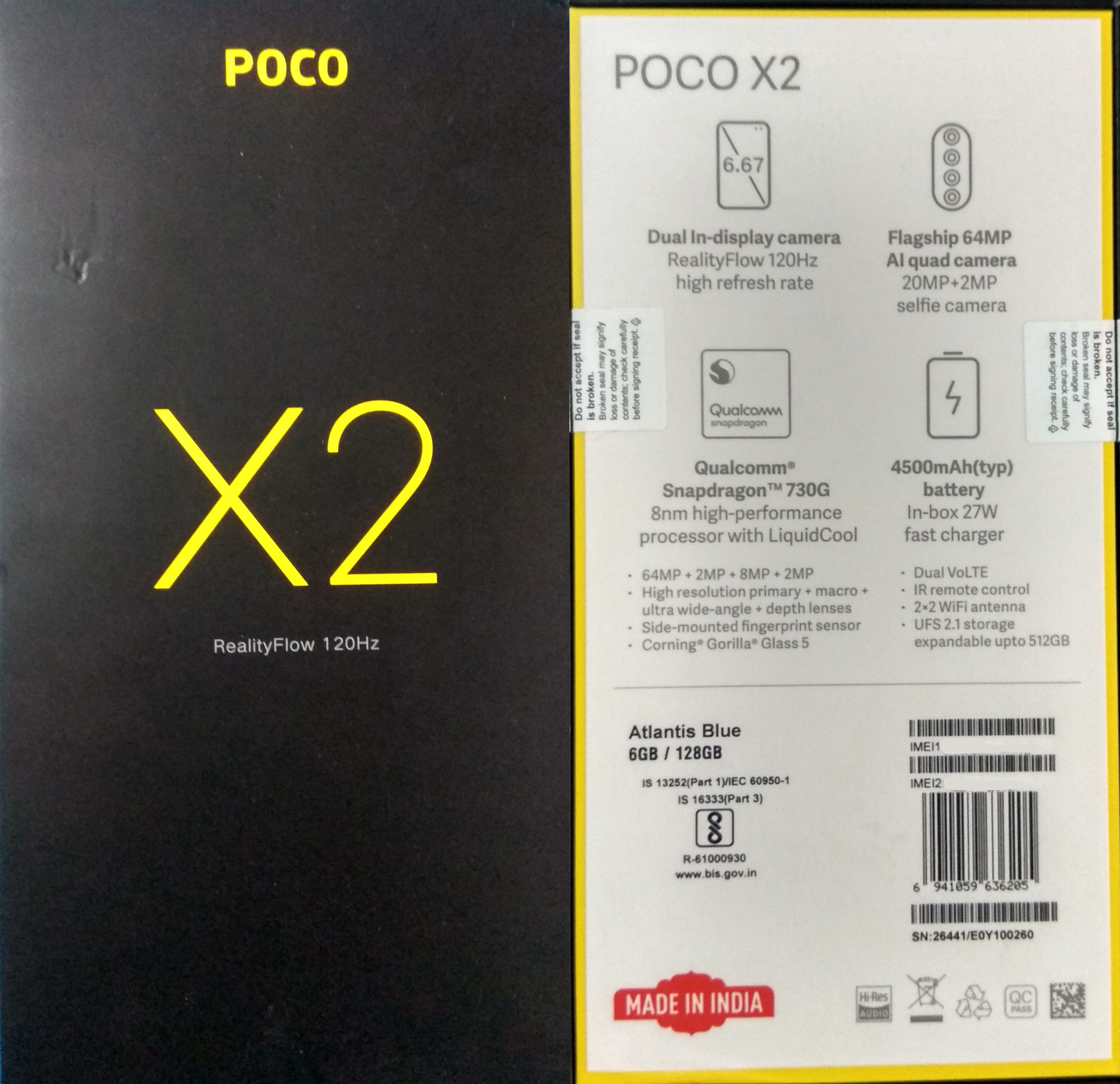 ​
I am happy to share that I bought a new mobile, POCO X2 6GB/128GB variant. I ordered it on 13th December through Flipkart and got it delivered on 15th. I ordered it during the "POCO Days" offer which brought down the price from Rs.18499 to Rs.15999. I am using the mobile for almost a week now and would like to share a genuine review of the mobile. Before going further, I would like to clear the doubts in some of your mind as to why i went for X2 instead of its recent successor X3. Poco X2 is a proven beast with nice reviews all over the internet, while the reviews about X3 wasn't so satisfactory especially about its camera. I also had Poco M2 Pro in mind but again the reviews were not in favor of it when it comes to call quality. So I decided that a known devil is better than unknown angel.

Note: i have reduced the display size of images for aesthetic reasons. click on the images for a full view. 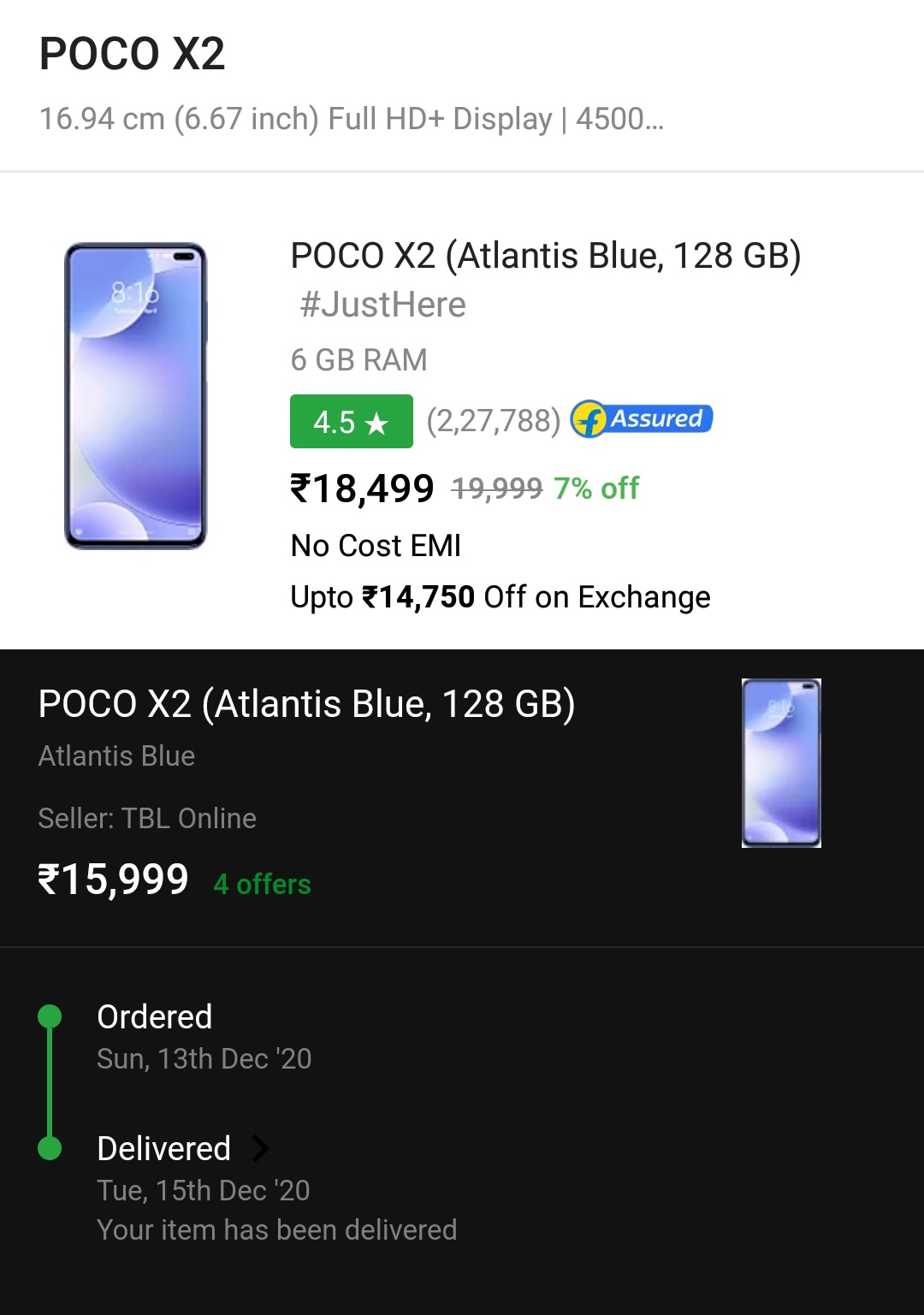 IN THE BOX & DESIGN

The Phone comes with a soft transparent back case, sim ejector, type C cable and a 27W fast charger. The phone is well designed and nicely built to give you a premium look in this price segment. It has a curved glass body and is well protected by Gorilla Glass 5 in the front and the back. The back panel has a glossy finish and nice shades around the camera. The device is said to be splash proof with P2i coating, which I haven’t tested. Lol. 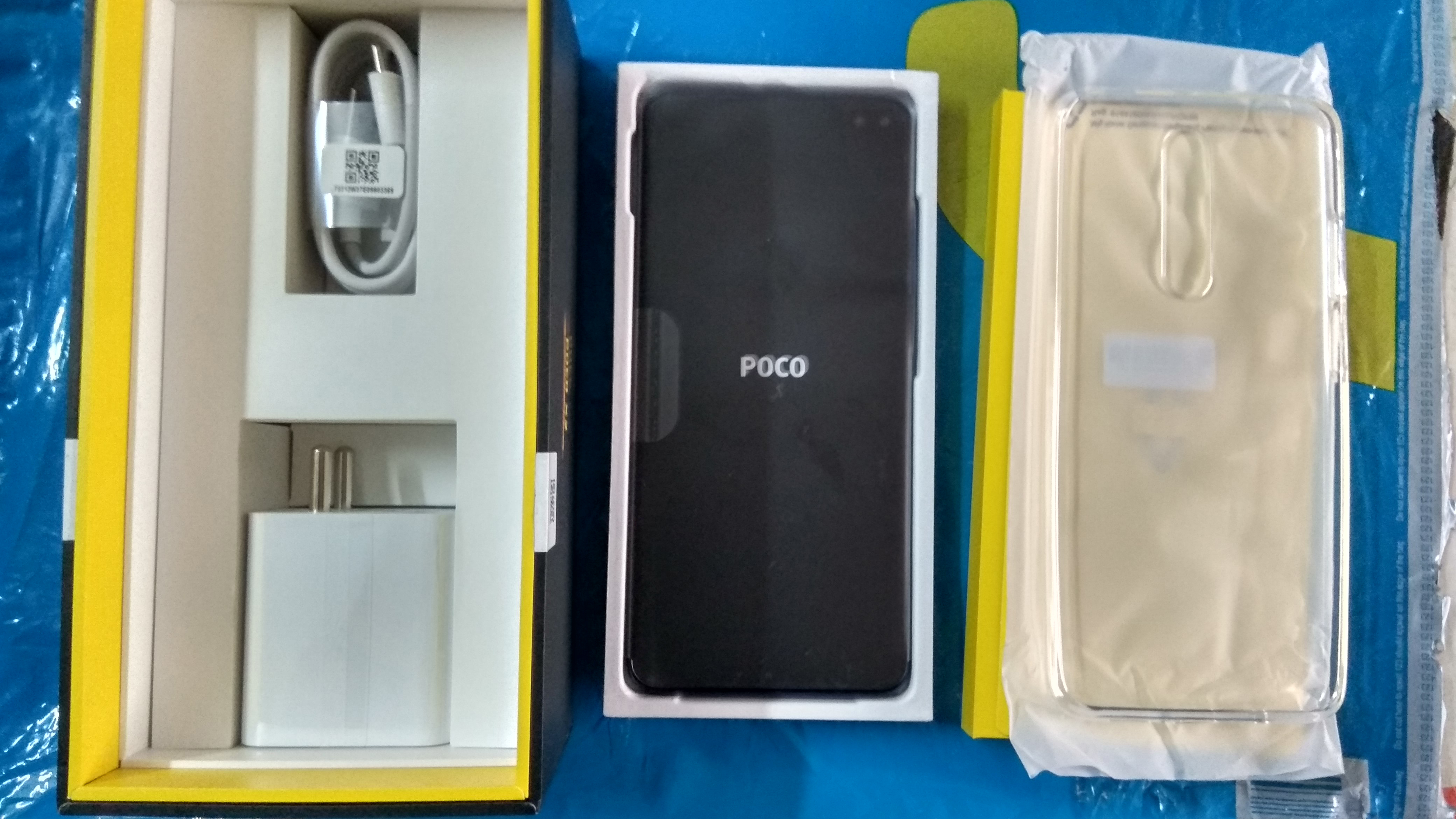 It has a IR blaster and Noise cancellation mic at the top, while the bottom has a speaker, mic, type C port and the 3.5mm jack. I personally don’t like the headphone jack at the bottom. I prefer it to be at the top for various reasons. The sim tray is on the left side and it is a hybrid slot and not a dedicated slot. But when you have 128GB internal storage, I don’t see a need for dedicated slot for myself. On the right side you have the volume rockers and the power button. The power button also features the fingerprint sensor, which is one of the talking points of this phone. Overall the phone looks great but it is also on the bulkier side. I wish it could have been a little lighter. 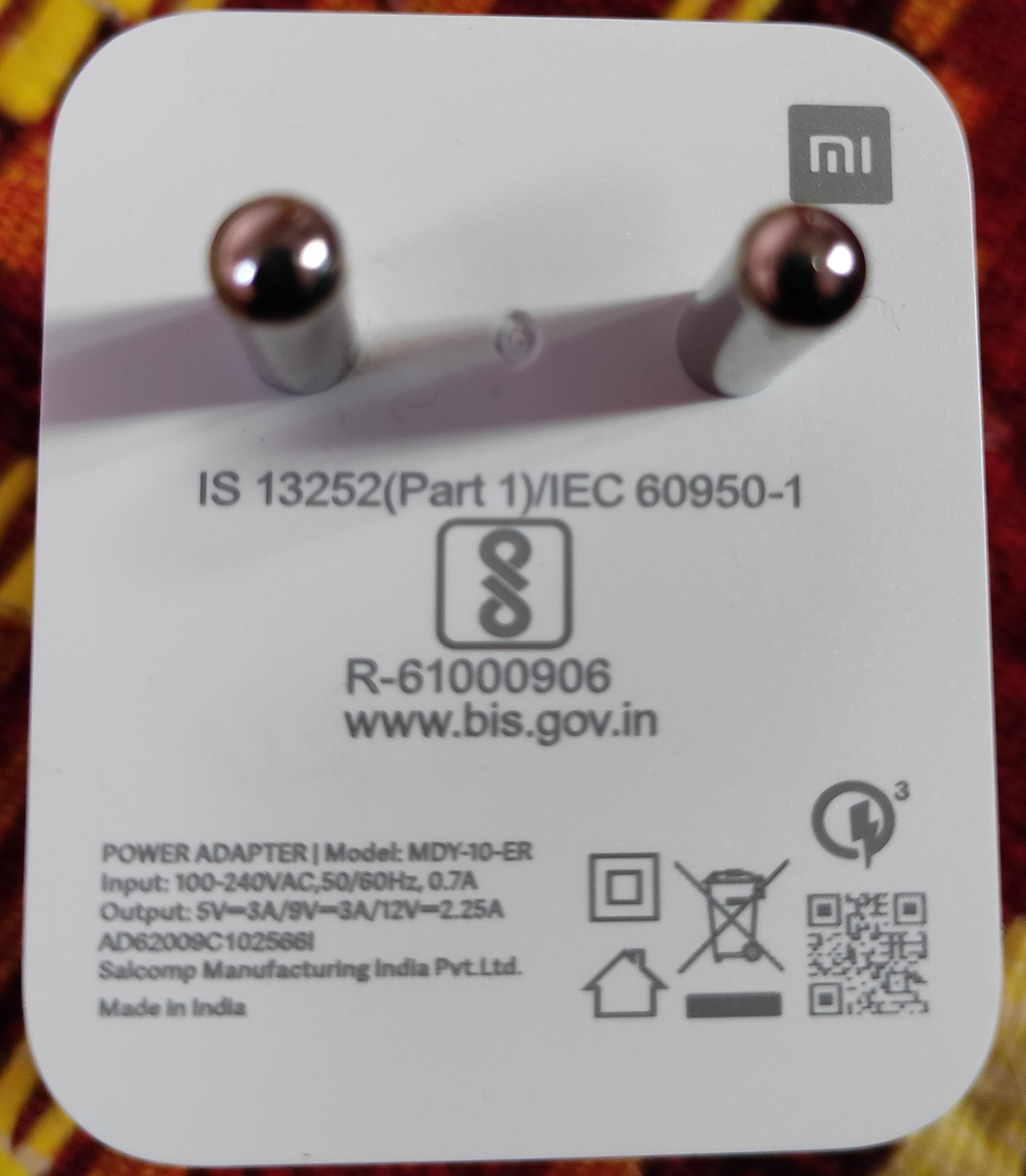 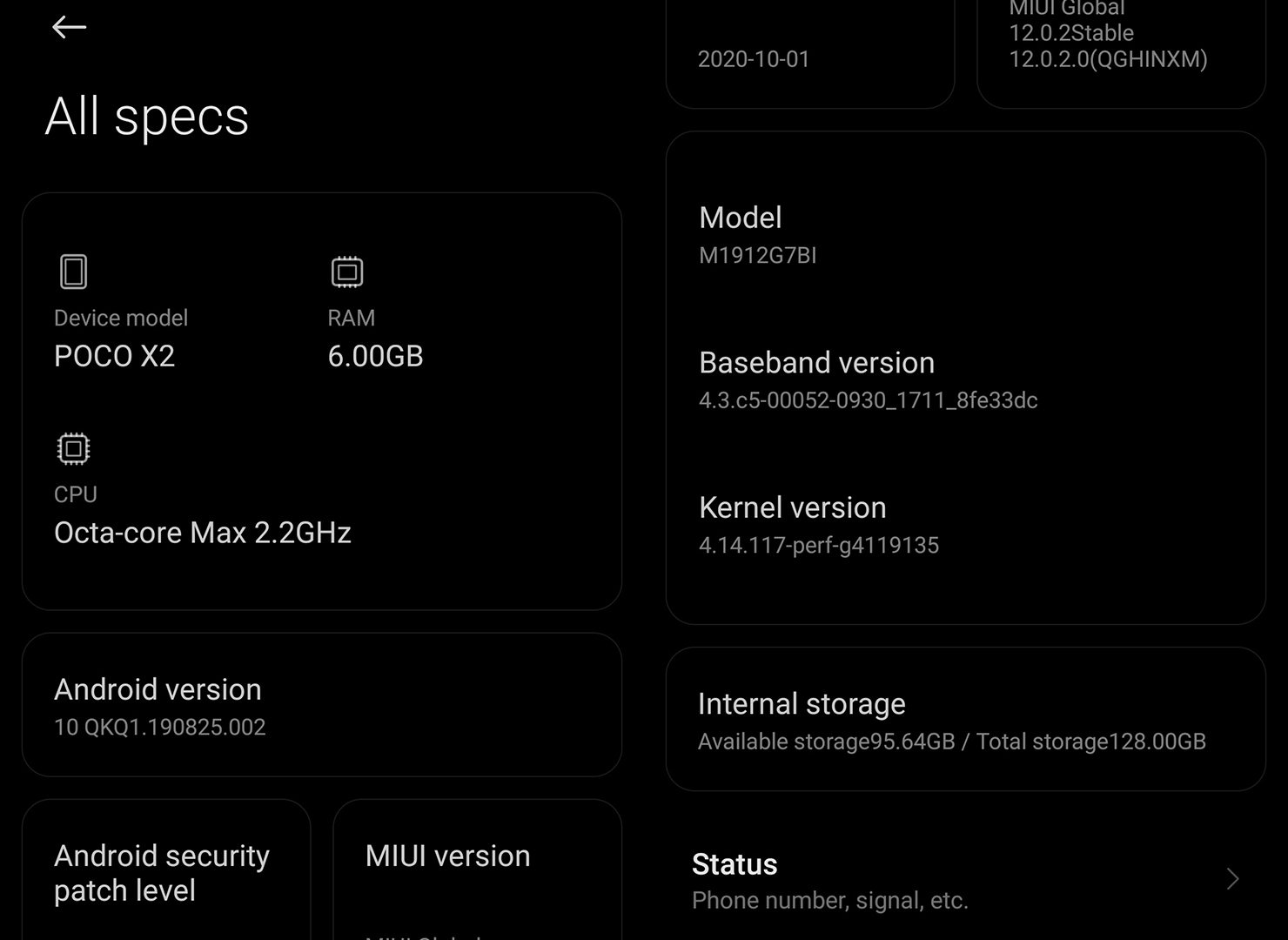 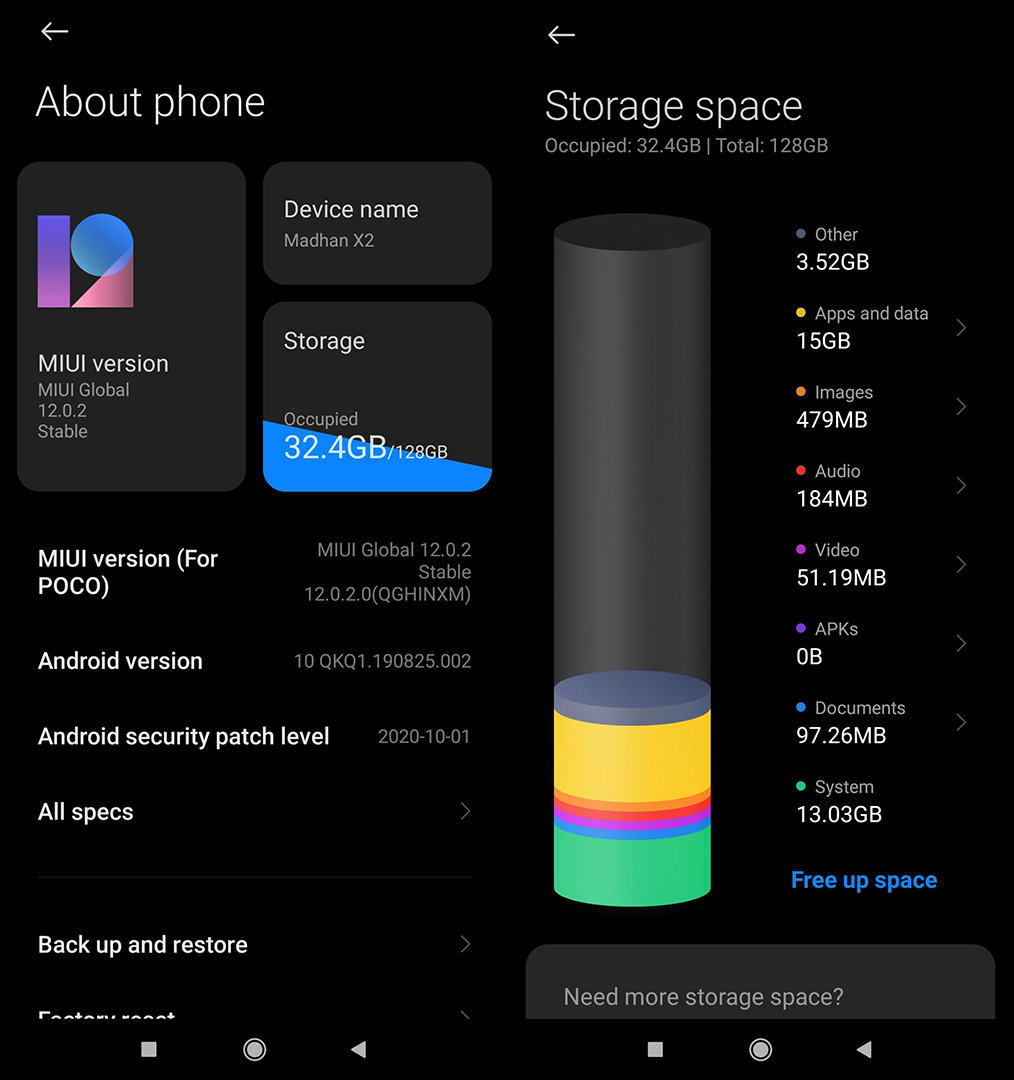 I have been using the phone for almost a week and the first thing I like to mention is that, I never faced any heating issues. Whether I play a game, watch video, or left in charge for a while it never got heated or even got warm for that matter. The SD 730G SoC runs anything you throw at it with ease. I haven’t noticed any lag while opening an app or playing games.

The MIUI is always good in RAM management and it is the same on this device too. Out of the 6GB RAM you can always find around 3-3.5GB available even after launching multiple apps and keeping them in background.

One of the most hyped features of the phone is its display with 120Hz refresh rate. It is only a IPS LCD and not an AMOLED screen. However, the color and contrast are pretty good for a LCD display. It does a great job in direct sunlight as well. The 120Hz refresh rate is really a delight on apps which support it. All of a sudden you feel that the phone is super responsive. I am not a heavy gamer but gladly a few games which I was already playing, like CSR Racing, Cover Fire, Dead Trigger 2 supports 120Hz. I could really feel the difference. However on the negative side it takes a toll on the battery.

The fingerprint sensor works pretty good and fast. I would say the unlock time is faster than my old Redmi Note 4 with the back fingerprint scanner. I was little skeptical about the side fingerprint scanner as it was built on the power button which has a smaller surface area compared to the back or in-display models. But it is as fast as any other type.

The phone ships with MIUI 11 (designed for POCO) based on Android 10. It does come with a lot of bloat wares but the good thing is we can uninstall almost majority of them. By saying bloat wares I am referring to the unnecessary Google Apps, Mi apps and Games. It allows us to uninstall almost majority of the Google Apps except Chrome, Gmail, Google, and YouTube, and all Mi Apps except Mi Pay and ShareMe. I really appreciate this approach as compared to Redmi or other brands where most of the Google and OEM apps cannot be uninstalled. The only unnecessary bloat ware that remains on the phone is the “GetApps” app, but it is silent and idle so far and did not disturb me with any ads/recommendations.

After setting up the device, I received an OTA update for MIUI 12 based on Android 10. It added some interesting additional features. POCO has already confirmed the upgrade to Android 11 for X2 and hopefully I receive it soon. I have also received a security upgrade with the October 2020 security patch. 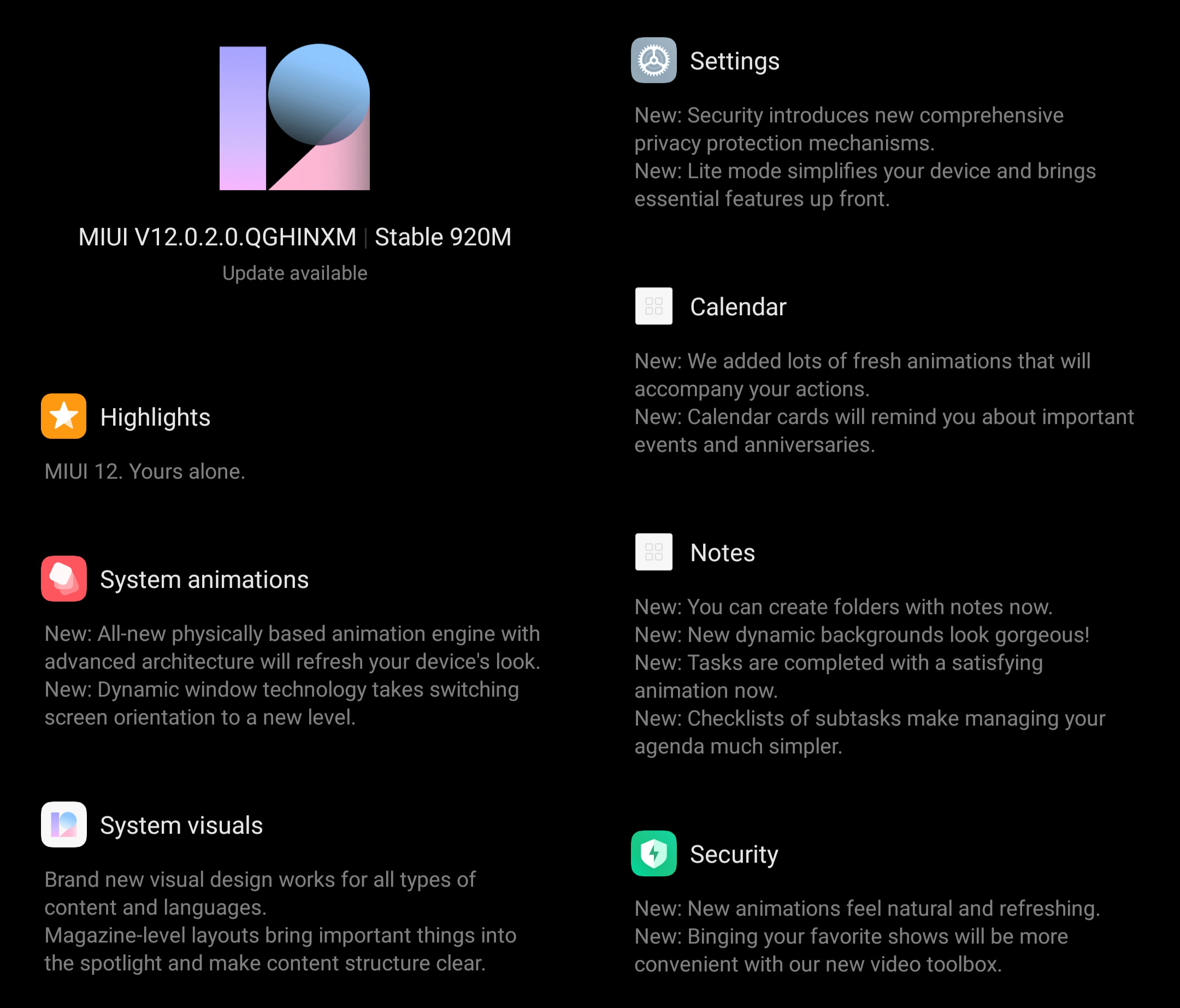 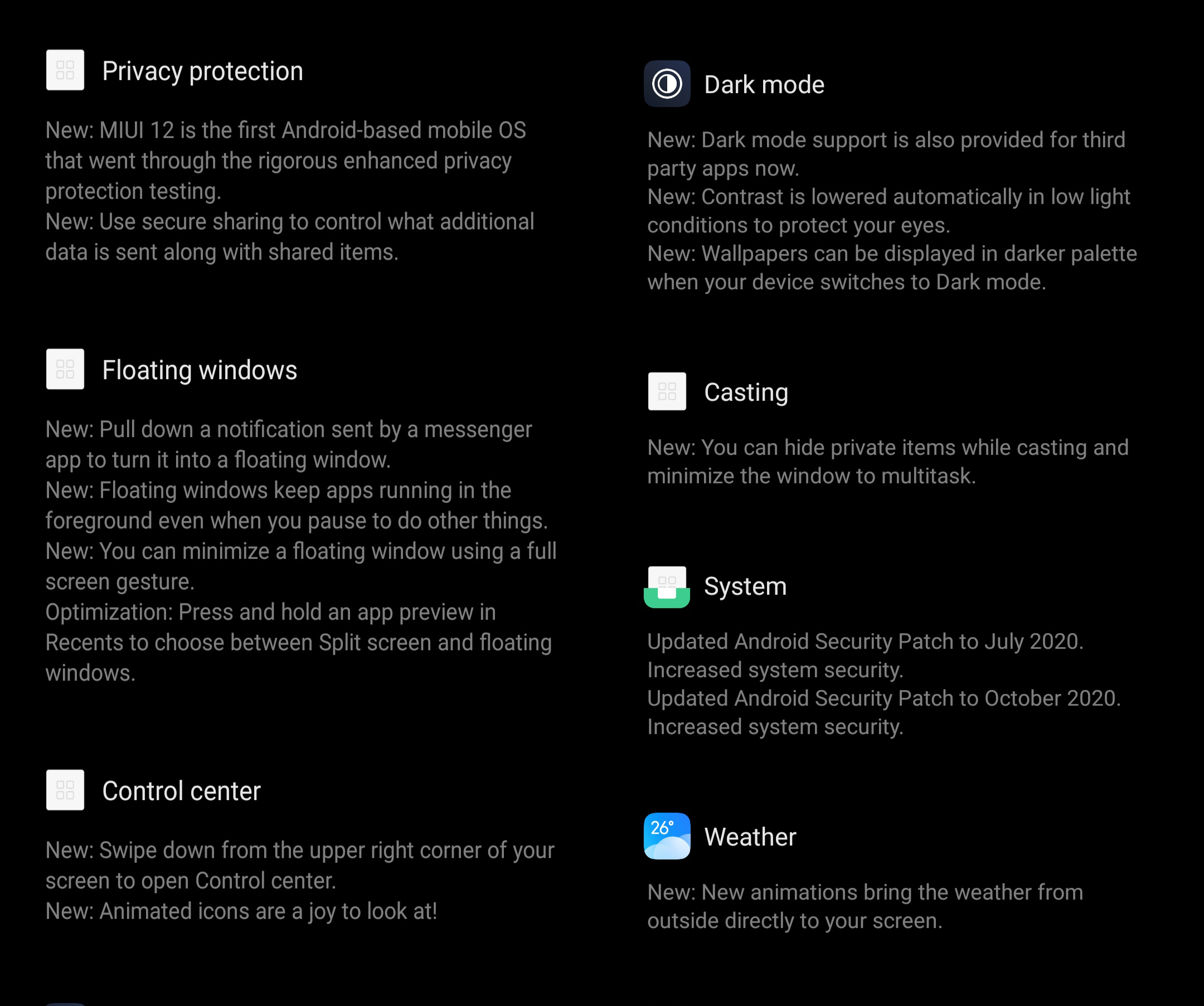 The UI is clean and smooth. Nice animations no lags. Xiaomi ships a different variant of MIUI for POCO devices which includes the POCO launcher and is expected to offer an ad-free experience. One of the most annoying factors of MIUI is the ads, served through system apps and notifications. That is not the case with this device as I haven’t seen/received any ads in UI or any system apps.

The phone comes with a 4500mAh battery and a 27W fast charger in-box. So, there is no hassle of buying a fast charger separately. Over this week I have used the mobile moderately. As I have mentioned earlier I am not a heavy user and do not have much resource hungry games or apps. But I do play games often and also use various chat apps frequently. I do have dual sim inserted with Dual 4G enabled and VoLTE on both sim. Also I take a lot of calls because of my profession.

As you can see in the screenshot, I used the phone for about 22 hours with the screen time of almost 10 hours and there’s still 20% left in the battery. I did play a lot of games during that period, and kept the refresh rate at 120Hz mainly to test the battery backup. Considering all these, I would say the battery lasts fairly well. Maybe it would last longer if the refresh rate is kept at 60Hz. However, heavy gamers might feel that the battery backup is low. I would say that is expected when you have 6.67” FHD display running at 120Hz with just 4500mAh battery. POCO could have gone for a bigger battery considering it comes with a gaming SoC and the device is targeted towards gamers and also its screen size and the higher refresh rate it offers. 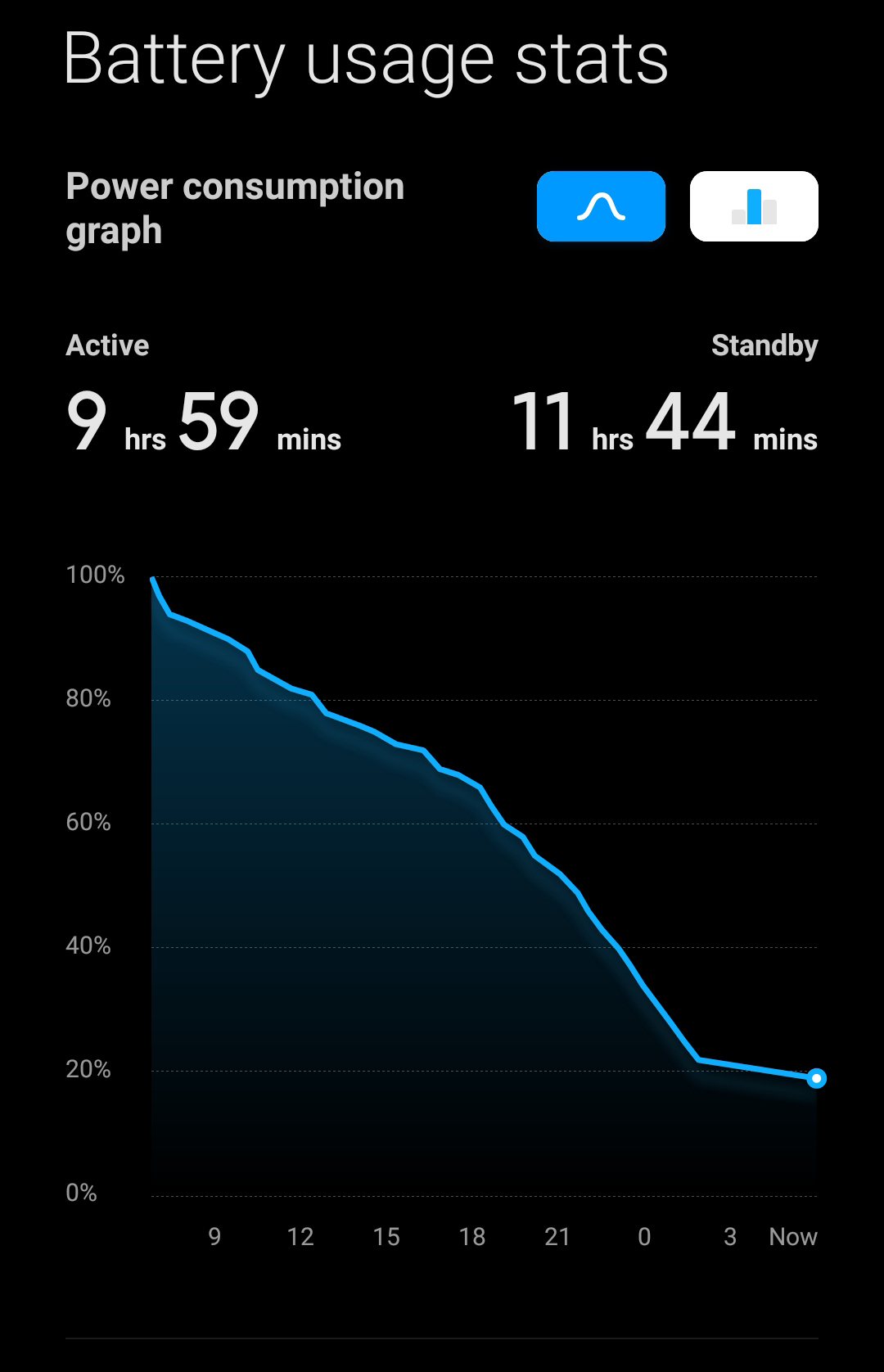 The 27W charger fires up the battery really quick. The charger offer various output ranging from 5V-3A, 9V-3A, and 12V-2.25A. It takes about 60-70 minutes to charge from 20-100%. I have included the screenshot for the confirmation. I haven’t tested a full cycle yet. I will do that shortly and check how much time it takes for 0-100%.

The real talking point of X2 is its cameras. It is equipped with a Quad cam array with a 64MP sensor as the primary camera. It has the Sony IMX686 sensor which captures photos with perfection. It also has a 8MP ultra-wide, 2MP Macro and 2MP Depth sensors. On the front it has a 20MP+2MP dual selfie camera setup. By default the camera takes pictures at 16MP with a resolution of 4624x3472 pixels. We can switch to various modes like 64M, Macro, Night Mode, Portrait, Panaroma, HDR and AI camera. It also offers a unique feature called VLOG mode which instantly edits your short videos and make it ready to publish. 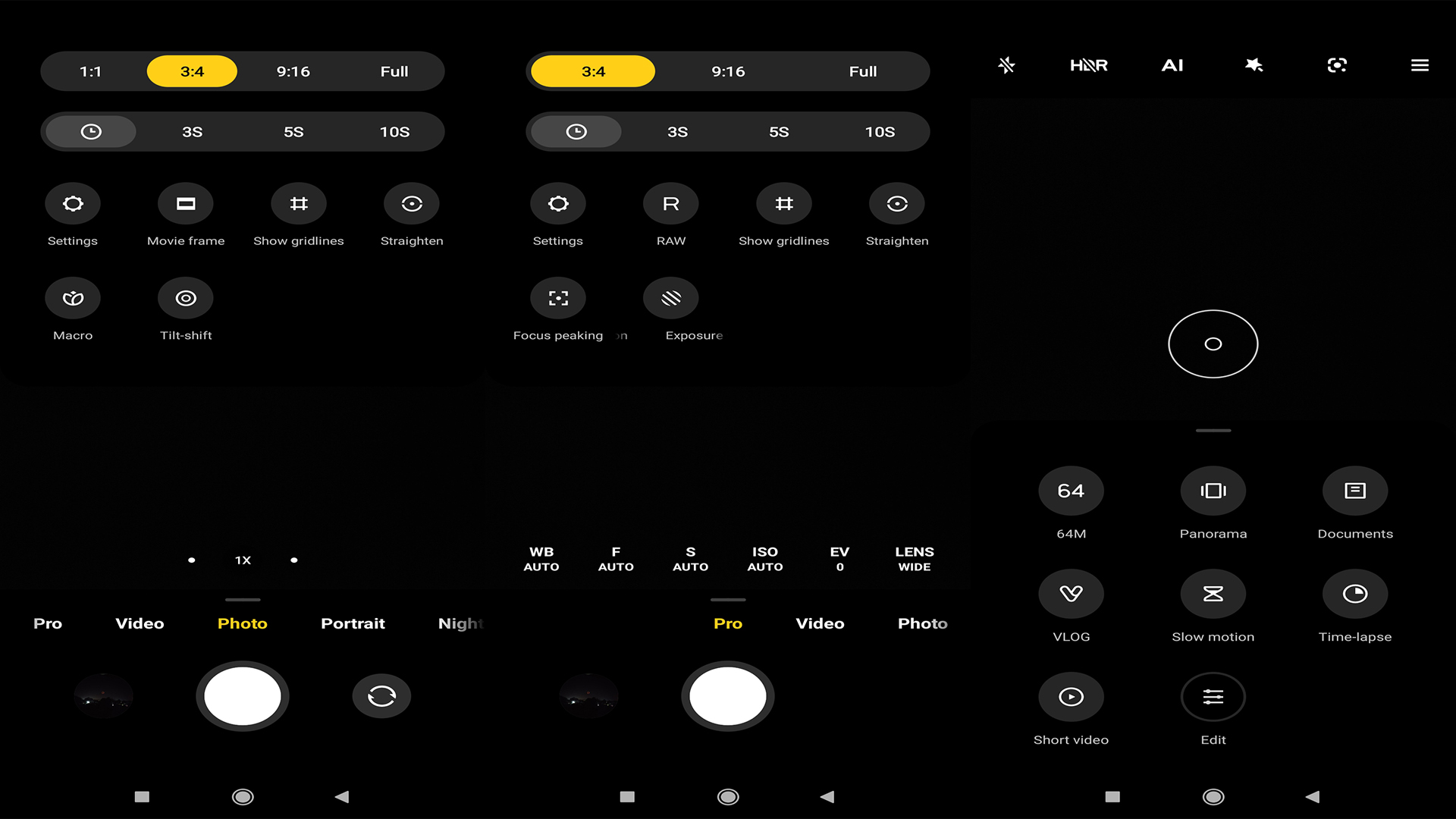 The color reproduction and image stabilization is fairly good. I have so far tested with human objects and mostly taken personal photos, so I have not uploaded any camera samples. I will try to share the samples later. I have taken few short videos and they came out well. The stabilization was good even when I was moving the device. However I feel the saturation on videos are little more than the photos. I am not sure if it works that way or I have to tinker with the settings. The selfie camera takes clear and crisp shots. However, I don’t like the big dual cam notch. They could have kept them as separate dots or went for single cam. Maybe POCO also realized it and went for a tiny dot punch hole display in the successor X3.

The rear camera supports capturing in RAW format which is useful for avid photographers/editors. It can also shoot 4k videos and slo-mo at 960fps.

The Earth will be better without Us.. · 40 · From Chennai
Trying to be happy by keeping others happy.
Staff member Community Manager

Raju lal said:
My FM radio is not working. Not getting any channel. Do you guys have any such problem?

It was smooth bro. It actually fixed some bugs which I had prior to the update. No issues so far.

Another update, MIUI 12.5.6, is available for my Poco X2. Looks like a security patch and performance optimization update. 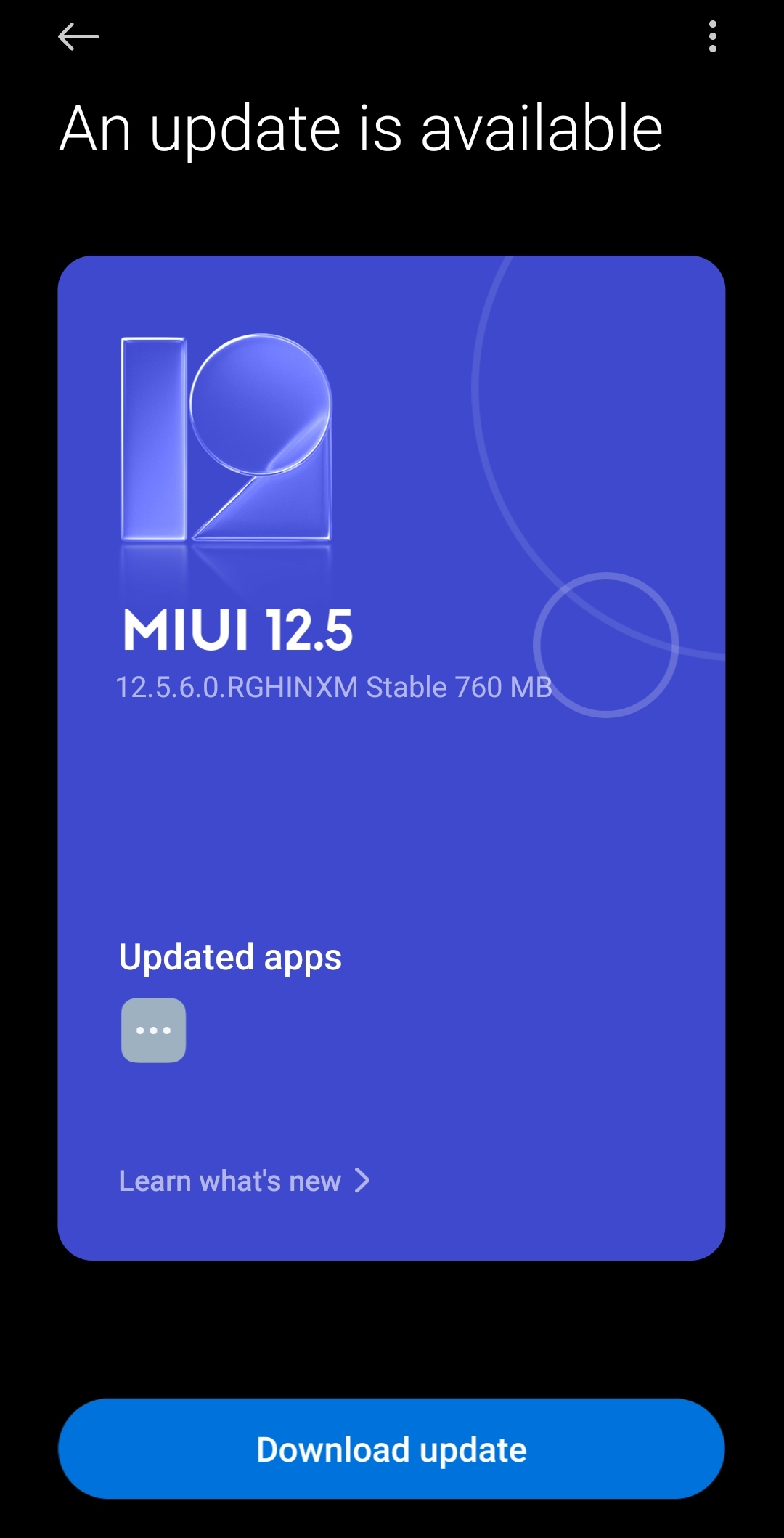 mmadhankumar said:
Another update, MIUI 12.5.6, is available for my Poco X2. Looks like a security patch and performance optimization update.

I did this. Not found any changes.
T

Raju lal said:
I did this. Not found any changes.
Click to expand...

Flashing rom is the only way to deal with Poco/Redmi Note/Mi devices. Excellent devices for custom roms.

Anybody having issues with battery? I use approximately 2-3hrs insta around 3-4 hrs browsing net and 2-3 hrs youtube and the battery goes from 100 to less than 20 in 10-12hrs

Go to fingerprint options -> fingerprint payments -> FIDO -> click certificate option. This will update the DRM certificate required for L1. This helped me in my Poco device.