Opera has released Opera Mini 6 for iOS, including an iPad version as well as support for the iPhone 4 Retina Display.

It features up to 90% compression of data traffic for speed and cost savings, making both your patience and wallet happy on slower connections or when roaming.

Updated design with a fresh new look and feel

the market. The updated version of Opera Mini 6 is said to be six-times faster while browsing even on slower and crowded networks. It has a fully automatic browser, which automatically adapts to the high resolution of the device and will automatically change the user interface to accommodate the screen size.

While browsing, the consumer will be able to open new page in background tab. It also has improved international font support for Arabic, Chinese, Vietnamese, and other non-Latin languages.

Opera Mini 6 browser is available for free download from the Apple App Store for both the iPhone and iPad. It is believed that the Opera Mini 6 features up to 90% compression of data traffic for speed and cost savings.

this is not a computer app,,

so move the thread on mobile forum.
M 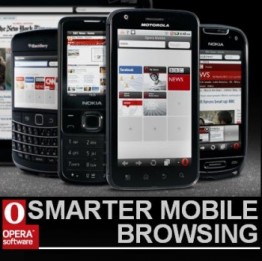 The latest version of Opera Mini 6.5 and Opera Mobile 11.5 both contain a innovative features which will keep track of your data usage.

A data counter located under the help menu in both products let you track your web surfing usage.

Two different counters, one for total usage and one for temporary usage, let you stay in charge of your data usage if you need to watch the data cap or costs.

To download the latest version of Opera Mini 6.5 browser point your mobile browser to m.opera.com.
Source:telecomtalk
B

Opera's latest 'State of the Mobile Web' monthly report stated that 22 countries have crossed the one million mark for the number of Opera Mini users - 11 of these countries crossed this mark in 2011. The Opera Mini is a web browser designed for mobile phones.
As per the September report, India was ranked as the country with second highest Opera Mini userbase, behind Russia - India has held that position since August 2011. India crossed the one million user mark back in May 2008 - the third country to do so after Russia (March 2007) and Indonesia (March 2008).

The October report stated that over 140 million folks used Opera Mini last month, a 6.6 percent increase from September 2011. The report stated that "much of this growth has taken place in countries like Russia, Indonesia, India, China and Brazil — countries where wired Internet penetration still has a long way to go and where (in some cases) handset usage already dwarfs what we see in the United States and Western Europe."

For October, users viewed a total of 86 billion pages - representing a 107 percent year-over-year increase. For those of you interested in number crunching statistics, the amount of data sent for these page views stood at almost 13 petabytes - which was reduced to 1335 terabytes of data, courtesy of Opera's data compression technology. To truly appreciate this statistic, consider the conversion rates for these figures: 1 petabyte is 1000 terabytes; 1 terabyte is 1000 gigabytes.

Lars Boilesen, CEO, Opera Software, was quoted in a press release as saying, "Opera Mini has gained users in every country, across 2G, 3G and 4G networks, across feature phone and smartphones. What these numbers won’t tell you is that many people use Opera Mini as their only means to get online. We’re seeing a whole new generation of people connect to the Web for the first time using a mobile device and we are only starting to see the changes — societal, technological, and cultural — that will happen as a result."

As of September 2011, the top three sites visited by Opera Mini users in India, in the descending order of ranking, were google.com, facebook.com and youtube.com. Not too surprisingly, for the same time period, the top ten handsets from which users accessed the Opera Mini browser were all Nokia devices - the top three devices, in descending order of ranking were Nokia 2690, Nokia 5130 XpressMusic, and Nokia X2.

Hello,
We all love Mozilla FireFox Browser on our PC.
Now, on your Nokia Symbian S60 Phone, you can give Opera Mini 6 a firefox like look.

Just tried to install it but it is showing certificate error,what to do?
A