NEW DELHI: The Supreme Court (SC) on Tuesday held the Muslim practice of triple talaq unconstitutional and struck it down by 3:2 majority.

The SC said triple talaq violates the fundamental rights of Muslim women as it irrevocably ends marriage without any chance of reconciliation.

Triple talaq , or verbal divorce, is practiced by some in the Muslim community to instantly divorce their wives by saying talaq three times.

Justice Abdul Nazeer and Chief Justice JS Khehar upheld the validity of triple talaq. CJI Khehar asked the government to bring legislation in six months to govern marriage and divorce in the Muslim community. He added that talaq-e-biddat is an integral part of the Sunni community and has been practiced for a 1000 years, reported ANI.

The ball is now in Parliament's court. It is to be noted that the Centre had during the course of hearings earlier this year told the bench that it will come out with a law to regulate marriage and divorce among Muslims if 'triple talaq' is held invalid and unconstitutional by the apex court.

In February this year, the SC said a Constitution bench would be set up to hear and decide on whether 'triple talaq', the oral divorce practice some Muslims follow, is constitutionally valid. The bench reserved its verdict on May 18 after a six-day marathon hearing during the summer vacation.

Shayara Bano, a 35-year-old woman, challenged the practice in 2016, a year after her husband of 15 years divorced her via triple talaq. Petitions of four other Muslim women - Aafreen Rehman, Gulshan Parveen, Ishrat Jahan and Atiya Sabri - were tagged with Bano's plea.

Some Muslim groups see the issue as a matter of religious right while others, including the Centre, termed it unconstitutional.

Thanks to the Govt and SC for giving a verdict that truly upholds the constitution.

Now Govt and SC has fulfilled another wish
S

Women will now more say... will study more... which wud help d community more. :k
A

now we need to abolish SC-ST quota in Study,Govt Job field.
Opportunity must be same for all.

Everything will happen in next 5 years. For that same Govt needs to be in power
S 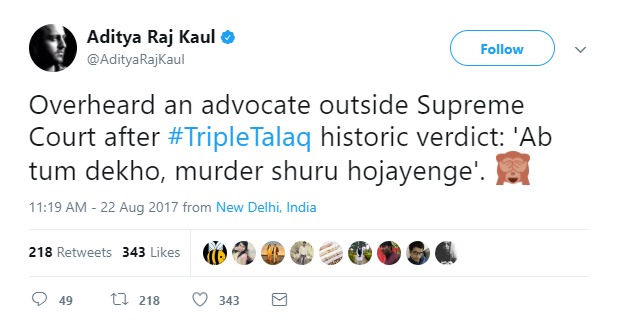 Anish Pai said:
Everything will happen in next 5 years. For that same Govt needs to be in power
Click to expand...

Don't worry, with Pappu at helm BJP will definitely win in 2019 :haha :grin
Triple century in UP elections was the 1st indication of that

Sarkar said:
After 70 years of struggle atlast Muslim women will taste the true meaning of freedom hya
Click to expand...