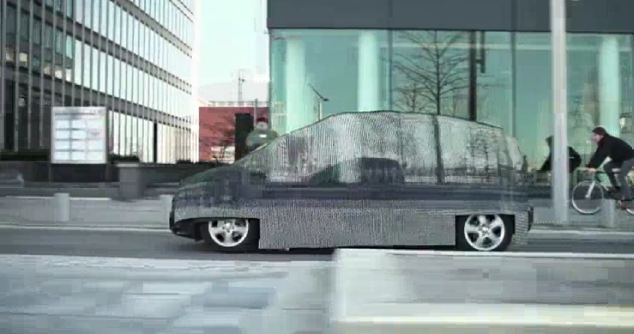 Using optical camouflage, technology experts at Mercedes Benz have figured out how to make an entire car disappear.

The researchers created the illusion that their new zero emissions F-Cell Mercedes Benz is not even there at all, the Daily Mail reported.

Taking the principal that to see through something you need to see what's behind it, they covered the driver's side of the car in mats of LEDs, and mounted a digital SLR camera on the opposite side of the vehicle.

The camera shoots video on the passenger side of the car and the video is displayed in real time on the driver side of the automobile.

This ingenious approach, originally pioneered by scientists at the University of Tokyo, works on the same principles of the blue screen used by TV weather forecasters and Hollywood filmmakers.

The idea also mimics the iPad 2 Halloween costume that seems to display a gaping hole in the human body.

In Mercedes' promotional video, stupefied Muggles stare and fall about in shock as the team put the car through its paces along the highways of Hamburg and the bridges of Bavaria.

Meanwhile online, while some pessimistic YouTube users were wary, anticipating that invisible cars would no doubt lead to brutal crashes, others fantasised about being able to park anywhere at all, without getting a ticket.