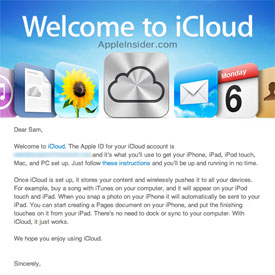 Welcome to iCloud! Or, at least, if you were one of the lucky few to receive an invitation to Apple's new online cloud storage service, at least you know that it's definitely coming – another goodie likely to be announced at Apple's Tuesday keynote.

According to Apple Insider, some people have been prematurely receiving these iCloud invitation emails. Unfortunately, it's all a tease: The emails themselves feature a link to set up one's iCloud – "Just follow these instructions and you'll be up and running in no time." – only clicking on the hyperlink leads users to a Website that isn't yet available.

In other words, Apple made a boo boo.

Apple is expected to announce iCloud as part of its big iOS 5 reveal this Tuesday. The service will allow users to store up to five gigabyte of information on Apple's servers. And here's the kicker: Purchased music, apps, books, TV shows, and a user's photographs don't count as part of the total. App data, settings, documents, and a user's email are some of the items that do – and if you're a heavy user of any of these, you'll still be able to upgrade your iCloud storage to beefier amounts for an undisclosed fee.

"Once iCloud is set up, it stores your content and wirelessly pushes it to all your devices," reads Apple's prematurely sent email.

"You can start creating a Pages document on your iPhone, and put the finishing touches on it from your iPad. There's no need to dock or sync to your computer. With iCloud, it just works."

As for iCloud's predecessor, MobileMe, Apple intends to phase the service out of existence by June 30, 2012. However, not all parts of the synchronization service are being lofted up into Apple's iCloud: iDisk, iWeb publishing, and Gallery synchronization, as well as the synchronization of Dashboard widgets, keychains, and System Preferences, are not making the move.

That said, Apple is allegedly open to feedback and would consider restoring some of these services within iCloud if enough users demand it.

Article Apple Music and other services expand to new countries; Apple Music gets a web-player