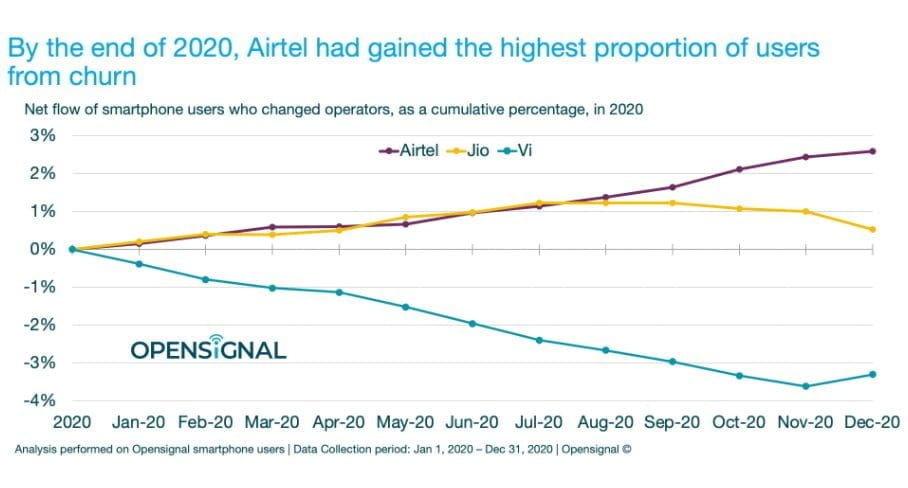 OpenSignal has analysed the trend of subscriber churn in India all through 2020 and charted the performance of the 3 private operators to quantify the net gainer and net loser of wireless subscribers in the process of churn. It turns out that Vi lost the most number of subscribers and most of these decided to port to Airtel network while Jio had a flattish curve with respect to churn subscriber additions.

Opensignal’s data shows that until August 2020, Airtel and Jio had been steadily gaining smartphone users, and in this period, both operators were neck and neck in the net users gained. From September onwards, when carriers once again decided to hike prices, Airtel continued to gain users until the end of the year. However, that trend on Jio’s network more or less flattened and then gradually started to decline — the negative trend was more pronounced from mid-November onwards. In contrast, Vi had been steadily losing customers since the beginning of the year and only started to see a deceleration of this trend from mid-November onwards.

Opensignal also analyzed the mobile experience of smartphone Leavers for the month of December 2020. They looked at the users’ mobile experience during the 30 days before they changed their mobile operator and compared that against the average experience on their original mobile network.

They found that smartphone Leavers, on average, had a worse mobile experience before they switched than the typical experience observed by other smartphone users on their original network provider. Leavers across Airtel, Jio and Vi on average spent between 74% and 155% more time without a mobile signal compared to the average scores on their networks; they also spent less time connected to either a 3G or 4G mobile connection and they experienced lower 4G Availability. Therefore, Opensignal’s data indicates that users experiencing mobile network pain points are more likely to change their mobile service provider.

OpenSignal has analysed the trend of subscriber churn in India all through 2020 and charted the performance of the 3 private operators to quantify the net gainer and net loser of wireless subscribers in the process of...