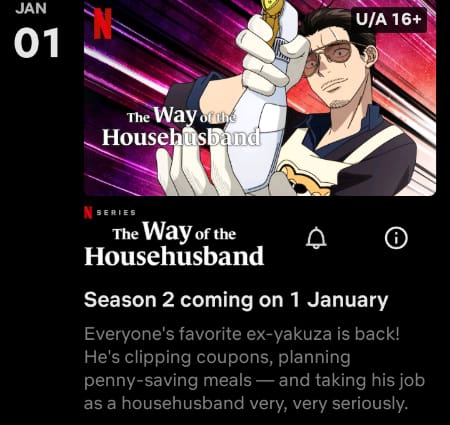 The Way of The Household Husband - Season 2 - ( Netflix series) Anime series would start streaming on 1st January 2023 onwards on Netflix India , weekly one new episode along japan . its about ex yakuza member how he becomes fulltime househusband and helps his wife Miku and takes care of cooking. its made in very interesting storyline , hilarious yet serious scenes combination and it keeps anime series very engaging to watch. its quite popular among fans worldwide including India that's why decided to post in separate thread. its one of must watch anime series , its popularity among fans is one of reasons why netflix renewed it for second season .
Last edited: 7 Dec 2022