Even as the tech world is abuzz with the new Samsung Galaxy S III, Samsung has meanwhile expanded its Windows Phone portfolio by unveiling the Samsung Omnia M. Taking on the likes of Nokia's Windows Phone-based Lumia 800 and 900 smartphones, the newly unveiled Omnia W comes with the latest Windows Phone 7.5 Mango OS and a range of improved hardware features.

The new Samsung device looks very similar to its predecessor Omnia 7. However, the Omnia M does not have a physical Windows home button, and will rely on the touch sensitive option. The phone has 4.0-inch Super AMOLED capacitive touch display with 480x800 resolution, 1.5GHz processor, 5MP auto-focus camera with LED flash and a VGA video calling camera. For connectivity, the Omnia M supports 3G HSDPA 7.2 Mbps, Wi-Fi 802.11 b/g/n, Bluetooth v 2.1, aGPS / Bing Map, and USB 2.0. It has 384MB of RAM along with 4GB of built-in storage. It has 1,500 mAh Li-on battery.

There is no official word on the launch date or pricing of the Omnia M, though Samsung has said will roll out to other regions following its European launch. 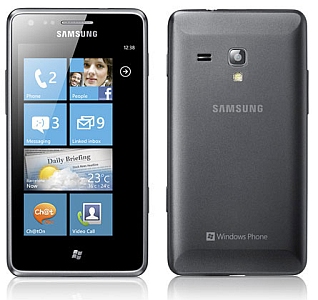 ya , sony is 100x better than samung @ Average in all fields
G

Only i like samsung notes but sony's notes are more better than that too..lol
S

do you mean notebook
if yes
then , sony is 1000x better than samsung in that , am looking to get a vaio soon
S

Yes i meant nootbook only and i had used one of my friends sony note so it was damn cool.
S