Apple to launch iPad 3 on March 7 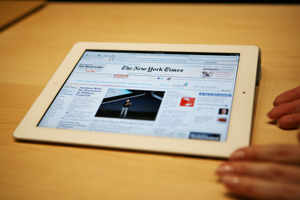 Apple Inc will hold a product event on March 7 in San Francisco, where it’s said to be releasing the third generation of its best-selling iPad tablet computer.

SAN FRANCISCO: Apple Inc, the world's most valuable company, will hold a product event on March 7 in San Francisco, where it's said to be releasing the third generation of its best-selling iPad tablet computer.

"We have something you really have to see. And touch," Apple said today in an invitation, which features a picture of an iPad screen. The new device will sport a high-definition display, run a faster processor and work with speedier wireless networks, people familiar with the product said last month.

After pioneering the tablet market two years ago, Apple is counting on the new model to beat back competition from newer devices running Google Inc's Android software. The company has sold more than 55 million iPads, generating at least $34.5 billion in revenue. Amazon.com Inc's Kindle Fire, which uses Android, emerged as the iPad's biggest rival over the holiday shopping season last year.

Trudy Muller, a spokeswoman for Cupertino, California-based Apple, declined to comment beyond the information in the event invitation.

Apple's manufacturing partners in Asia started ramping up production of the iPad 3 in January, said one of the people familiar with the matter, who asked not to be named because the details aren't public. The tablet will use a quad-core chip, an enhancement that lets users jump more quickly between applications, the people said.

LTE networks
The company has been working to make the iPad compatible with a wireless standard called long-term evolution, or LTE, one of the people said last month. Carriers such as Verizon Wireless and AT&T Inc are rolling out LTE networks to give users faster access to data.

Smartphone makers, including Samsung Electronics Co, Motorola Mobility Holdings Inc and Nokia Oyj, have already introduced smartphones that work on the faster networks. Apple is bringing LTE to the iPad before the iPhone because the tablet has a bigger battery and can better support the power requirements of the newer technology, one of the people said.

The new Retina display is capable of greater resolution than the current iPad, with more pixels on its screen than some high-definition televisions, the person said. The pixels are small enough to make the images look like printed material, according to the person. Videos begin playing almost instantly because of the additional graphics processing, the person said.

The introduction of the new iPad will be Apple's first major hardware release since the death of co-founder Steve Jobs in October. With new features, Chief Executive Officer Tim Cook aims to give customers more reasons to stick with the iPad, even as rivals undercut it on price. While Apple's tablet starts at $499, the Kindle Fire costs $199.

Amazon.com, the world's largest online retailer, surpassed Samsung as the No 2 seller of tablet computers last quarter, shipping 3.89 million units, according to research firm IHS Inc Apple, meanwhile, maintained its lead in the market, accounting for more than half of shipments.

The company also may use the March event to unveil an updated Apple TV set-top box, which could stream higher- resolution video to consumers' televisions, according to Gene Munster, an analyst at Piper Jaffray Cos in Minneapolis. Apple is planning to release a full television set as early as the December quarter, Munster said today in a report, reiterating an earlier prediction.

The new iPad is being assembled by Apple's main manufacturing partner, Foxconn Technology Group. That company, which also builds the iPhone and other Apple products, gets about 22 per cent of its sales from Apple, according to supply- chain data compiled by Bloomberg.