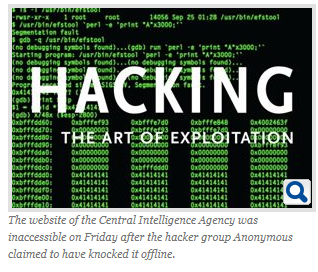 WASHINGTON: The website of the Central Intelligence Agency was inaccessible on Friday after the hacker group Anonymous claimed to have knocked it offline.

"CIA Tango down," a member of Anonymous said on @YourAnonNews, a Twitter feed used by the group. "Tango down" is an expression used by the US Special Forces when they have eliminated an enemy.

More than two hours after the initial attack on the site attempts by AFP to reach cia.gov were met with a message saying the Web page was not available.

Asked about the apparent website outage, a CIA spokeswoman said: "We are aware of the problems accessing our web site, and are working to resolve them."

Members of Anonymous also claimed Friday to have hacked the website of Camimex, the Mexican chamber of mines, and posted emails taken from the site online.

Like cia.gov, the camimex.org.mx site was unavailable on Friday.

Anonymous last month briefly knocked the websites of the US Justice Department and the Federal Bureau of Investigation offline.

Those attacks were in retaliation for the US shutdown of file-sharing site Megaupload.

There was no immediate explanation from Anonymous for the targeting of the CIA site.

Most Anonymous cyberattacks are distributed denial of service attacks in which a large number of computers are commanded to simultaneously visit a website, overwhelming its servers.
Click to expand...