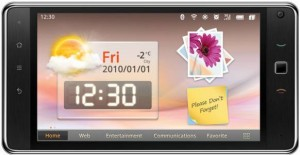 India is likelyt to see a flurry of tablets and latest smartphones with the 3G spectrum rolled out recently. While Beetel’s Magiq tablet with its 7-inch display, mobile radio and WiFi chip runs on Android 2.2 Froyo operating system.

Reliance’s tablet, manufactured by Chinese copmany ZTE Telecom, is also a 3G tablet with 7-inch display running on Android 2.3 OS. With 512 MB RAM, it comes with a 4GB SD card and is extendable up to 32 GB.

Among others, it promises features like push mail, video streaming, documents to go, Mobile TV, and Video Recording. Apart from these telecom providers, tablet makers like Samsung and Apple are also in the race.

The Apple iPad 2 3G version starts at 36,900 rupees. Apart from this, HTC Flyer, the first Android tablet from HTC, which runs on the Android 2.4 version is likely to hit Indian market soon.