Airtel is reportedly offering its postpaid customers up to 10GB additional 3G or 4G data at just Rs. 100. The move by Airtel can be seen as an after effect of Reliance Jio Prime subscription plan announcement made on Tuesday.

Update : Airtel has reached out to Gadgets 360 saying that the 10GB data offer has been available to select users for few weeks and is not a new offer.

Reliance Industries Chairman Mukesh Ambani on Tuesday revamped the company's Reliance Jio offerings and announced the new Reliance Jio Prime subscription that will offer unlimited services at a nominal price. Airtel's latest move will mean that postpaid subscribers in India will be able to opt for the additional data benefit by just paying Rs. 100. It's worth mentioning that Airtel postpaid subscribers to avail the 10GB 4G data at just Rs. 100 will need to have a 4G smartphone.

As before, Airtel is likely to offer 4G services in nearly 22 circles in India, and for the other non-4G circles, the company will provide 3G data against this offer. Similar to Airtel's earlier offers, the new "Surprise Offer" may require users to avail the free benefit via the MyAirtel app. The 10GB data is likely to be valid only for 28 days.

The Airtel offer was first reported by India Today Tech, and it added that the "Surprise Offer" by the telecom company will be in addition to an existing plan subscribed by the postpaid customers. Unfortunately, Airtel's offer of 10GB data at just Rs. 100 isn't available to all postpaid users. Gadgets 360 has written to Airtel to get a clarification on the new "Surprise offer."

This is not the first time when Airtel has bumped the data offering at a minimal price. Last year, Airtel offered up to 10GB data at a price of Rs. 259.

Update: Airtel has reached out to Gadgets 360 saying that the 10GB data offer has been available to select users for few weeks and is not a new offer.
K

how to redeem and where to get ?
T 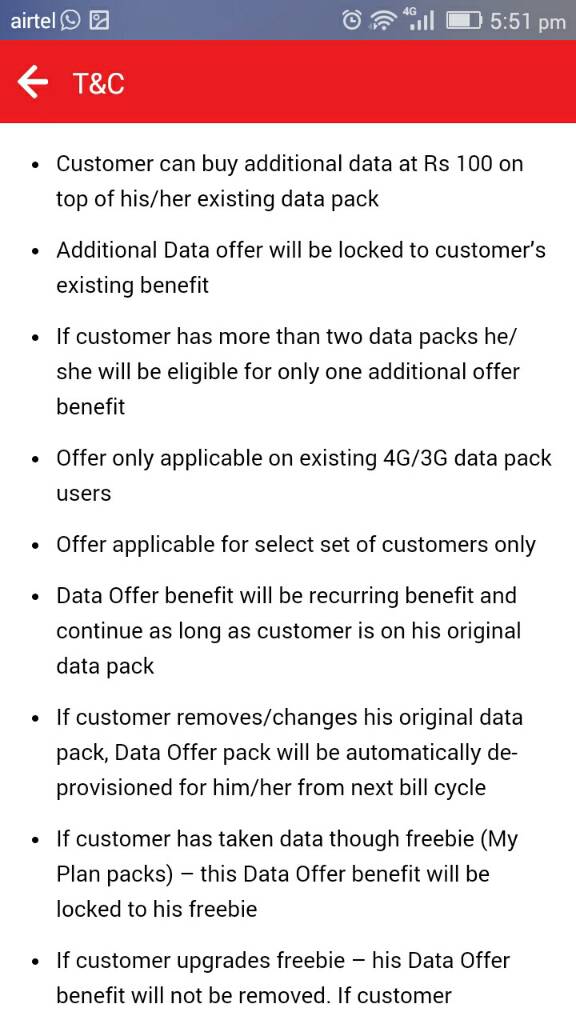 I think my friend got this a week back. I'm not sure but he sent me yday