A new video demonstration posted by Microsoft on YouTube shows that the Windows 8 can load completely within 8 seconds. Normally, windows takes some time to load its system after you press the power button. In Windows 7, you’ll find two options named “Shutdown” and “Hibernate”. Hibernate will save your work to a separate file and power off your machine and Shutdown means a complete restart of driver, kernel, systems etc.. 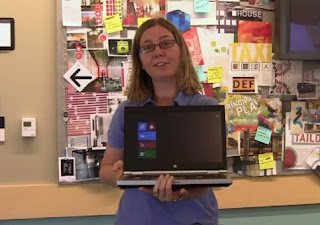 But in Windows 8 they have combined these two things. So when you press the shutdown button, all user sessions will be closed, but the kernel session will be hibernated. That means it will be a partial shutdown/hibernate and not a complete one.

According to the blog post by Microsoft main goal with Windows 8 is to effectively draw the power when switched off and create a a fresh session after boot with faster boot up. The boot time is obviously faster, and it was due to partial hibernation. instead of a full hibernate, which includes a lot of memory pages in use by apps, session's & hibernation data is much smaller, which takes substantially less time to write to disk. Watch the video below to see Windows 8 boot live.

It been also claimed by Microsoft that Windows 8 can boot faster than MacBook's OS X Lion. Microsoft is expected to roll out more intro about the Windows 8 operating system at the Microsoft’s Build conference next week, where the tech giant is also poised to introduce an unannounced Samsung tablet,which is an Intel-powered slim tablet.

Microsift is creating a lot of hype around windows 8,hope it is not a disappointment like Windows vista,yes 8 seconds is fast even compared to the Hibernate feature in XP,vista and windows 7,lets see how fast it is in a working environment.
M

Smartphone Mobile took more than 8 secs to boot.... I doubt about this .....
one thing is there , if they have removed new hardware chk process during bootup and also did some services startup after the desktop comes alive, then they may fake users as if windows booted in less time than actual bootup time.
G

Lets we will wait and watch.
I

Hibernation takes good time too, since it loads up the kernal and sessions(here only kernal).
I have used Win 8, and this thing doesnt hold good. Also, if they are making it a Partial Shutdown everytime, it will for sure create complications later and there will be crashes and errors in future.
A shutdown and Restart is as essential to a PC as Eating and sleeping to a human !
M

iS THAT ME said:
A shutdown and Restart is as essential to a PC as Eating and sleeping to a human !
Click to expand...

not at all if its isn't windows operated.....
linux based server works 24x7 for years without any glitches.
I

iS THAT ME said:
A shutdown and Restart is as essential to a PC as Eating and sleeping to a human !
Click to expand...

not at all if its isn't windows operated.....
linux based server works 24x7 for years without any glitches.
Click to expand...

Well, mystic bro. Ofcourse I am talking about Windows Based...
Linus based servers can work 24x7, because...thy are Linux based.
Windows based ones can work 24x7 too, I have highest record of 11 days...but that affects performance for sure...
That is why people prefer Linux based hosting
S

and as per me linux servers are more user friendly than windows as per servers is consult
but i dont know about it as per os is consult
am planning for linux os in my new sony lappy
i will buy it in jun 2012 for sure.
A

U can keep linux or better ubuntu as multi os along with windows.
I

ubuntu is good. I can help u get a free ubuntu distro mailed to you directly from netherlands...