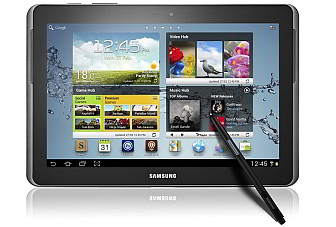 Samsung has not revealed too many specifications at MWC 2012 however, neither has it provided a release date. Interestingly, the Samsung Galaxy Note 10.1 will come with Adobe Photoshop Touch and Ideas for Android pre-installed.

For now, it is known the Galaxy Note 10.1 tablet features a 1.4GHz dual-core processor, and 3G HSPA+ connectivity.

Samsung has announced some other details however, such as the multi-screen interface, allowing users to sketch notes even while watching videos, or browsing. The S Pen's S Note app allow users to make collages of notes, sketches, and digital media.