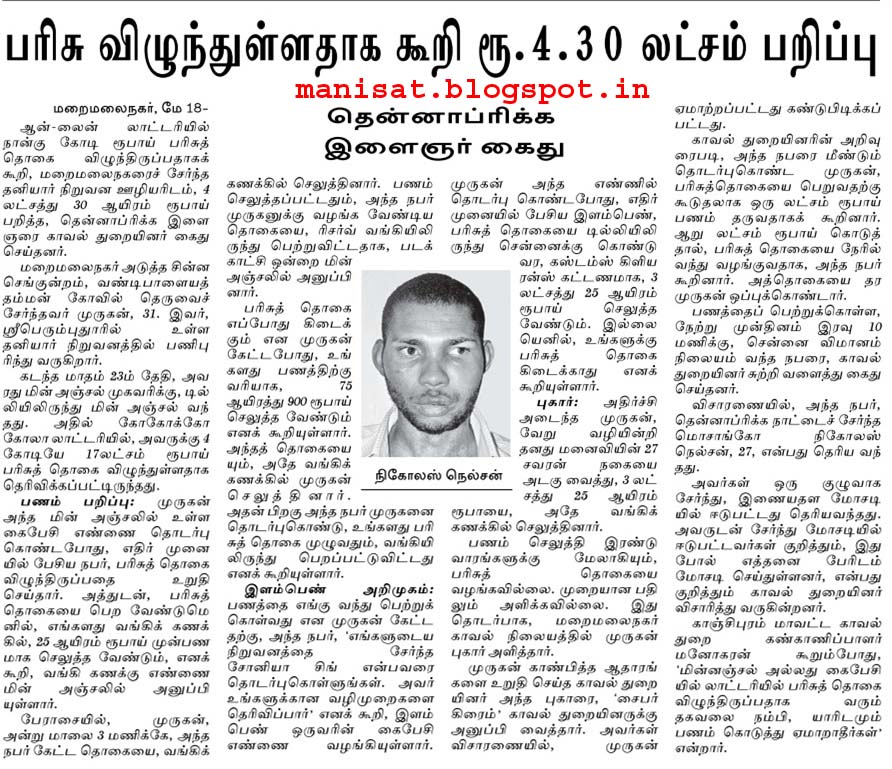 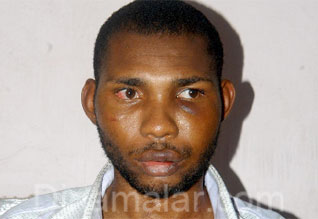 Flush of money: Murugan in the e-mail contact phone number, the person who in the end, confirmed that prize money would have fallen. In addition, in order to get the prize, our bank accounts, to pay 25 thousand rupees as an advance, claiming, bank account number in the sent e-mail. In Greed, Murugan, 3 O'clock in the evening, after hearing that person an amount, paid in a bank account. Paid, the person must provide the amount of Muruga, can get from the Reserve Bank, one video sent in e-mail.
When asked Murugan to get prize money, the tax on your money, sure they would have to pay 75 rupees to 900 thousand. That amount, the same bank account, paid at the Murugan. Murukanai then contact that person, the entire amount of your gift, the bank said that from the received.

Young woman Introduction: money and where to come and take the Murugan asked, the person, "Our Institute Sonia Singh as a contact. He algorithms for concern 'that, a young person's mobile phone number provided. Murugan, the number involved, the opposite end of the meeting a young, award amount come from Delhi to Chennai, Customs clearance fees, 3 lakh 25 thousand rupees to pay. Otherwise, you have to get prize money.

Report: Murugan shocked, had no option but to pawn his wife's necklace, 27 pound, 3 lakh 25 thousand rupees, paid in the same bank account. Melakiyum pay for two weeks, did not give the prize amount. Did not provide a formal response. In this regard, Murugan maraimalainakar complaint at the police station. Murugan showed evidence that the police in the report, "Cyber ​​Crime, the police sent. Their investigation, Murugan betrayed discovered. Police Department's arivuraipati, the man again contacted Murugan, the prize fund to acquire an additional one lakh rupees, the money could be paid. Six lakh rupees, , prize to be delivered in person, the person said. attokaiyai Muruga agreed quality. money to obtain, at 10 the night before yesterday, the person's flight station, the police surrounded and arrested.
At trial, the person, the South African country mocanko Nicholas Nelson, 27, came to know that. They join a group, revealed in an Internet fraud. He, along with those involved in fraud, and fraud have to be troubled by how many people, the police report, said. Manoharan said police and district news, "the e-mail or mobile phone in the lottery prize money pit rely on the information, anyone with money emaratirkal 'he said.

File: Nigerian fraud is a growing public awareness about the supposed planet should have a file called Metropolitan police commissioner Vishwanathan.
The increase in Internet usage. Accordingly 'Nigerian' fraud and fraud is now the name is growing. However, criminals can easily escape the lack of public awareness. E - mail, sms is likely influenced by the public in various ways.
'Women are beautiful wedding, send them a gift, send some money', 'You work in a big company in a foreign country, millions of rupees paid, send money, will get the order right away,' many millions of foreign lottery prize to viluntur. Send money, then you anuppurom ',' You got a BMW car. Tariff, transit fee, local taxes, while only anuppuninkanna Note that many of these troubles, S. daily. M. S, E - mail come through.
Such information, trusting, emantalo, put together a little calanappattalo property, bank balance would go with this he bestowed the same muscle.
'I have evidence that the complaint did, the person is difficult to capture. You can contact vaippatellam, unheard of unknown faces. We are aware that the earlier the better.
Viswanathan Coimbatore Delhi Metropolitan Police Commissioner, issued a statement:
Nigerian fraud complaints related to fraud in the name comes from the Metropolitan police. Cyber ​​Crime Unit investigated the intantu 23 petition has been received. A case has been registered.
SMS, send them by e-mail from their bank details emarupavarkal attractive looking letters, payote tta, photograph, personal information and keep it from getting money in the amounts and gradually that they are plucked.
Disconnect connection with emarukirom knowing that they are deceived. The Such complaints can inform the police. He said Viswanathan.

J
Walmart want the new e-commerce rules to be delayed