Petrol prices up by Rs 3 a litre

NEW DELHI: State-owned oil
companies are all set to hike petrol
prices by around Rs 3 per litre
which will be effective from
tonight. "Looks like the hike will be over
Rs 3 per litre," a top official at one
of the three state-run fuel retailers
said. Indian Oil Corp (IOC), Bharat Petroleum Corp (BPCL) and Hindsutan Petroleum
Corp (HPCL) now lose Rs 2.61 per litre due to high
international crude oil prices and with rupee
touching two-year low against the US dollar, the
losses have increased the cost of importing crude
oil. "After adding local taxes, the hike needed at retail
level comes to over Rs 3 per litre," the official said. Petrol price were last hiked by Rs 5 per litre on May
15. It costs Rs 63.70 per litre in Delhi. "The exact quantum of hike at different cities is
being worked out," the official said. Petrol price was freed from the government control
in June last year but the retail rates have not moved
in line with cost as high inflation rate forced the oil
companies to seek 'advice' from parent oil ministry
before revising rates. IOC, BPCL and HPCL have lost Rs 2,450 crore this
fiscal on selling petrol below the cost. Besides petrol, the three firms are losing Rs 263
crore per day on selling diesel, domestic LPG and
kerosene below cost. Diesel is being sold at a
subsidy of Rs 6.05 a litre, kerosene at Rs 23.25 per
litre while domestic LPG rates are under-priced by
Rs 267 per 14.2-kg cylinder. Rupee fell to 48 per dollar yesterday for the first
time since September 2009. "Every rupee
depreciation, the under- recovery (revenue loss)
increases annually by around Rs 9,000 crore," he
said.

Rs.72 in Mumbai. I will park my car and bike in garage and walk. Healthy as well.
V

kramkumar said:
Rs.72 in Mumbai. I will park my car and bike in garage and walk. Healthy as well.
Click to expand...

I posted this chart sometime ago : 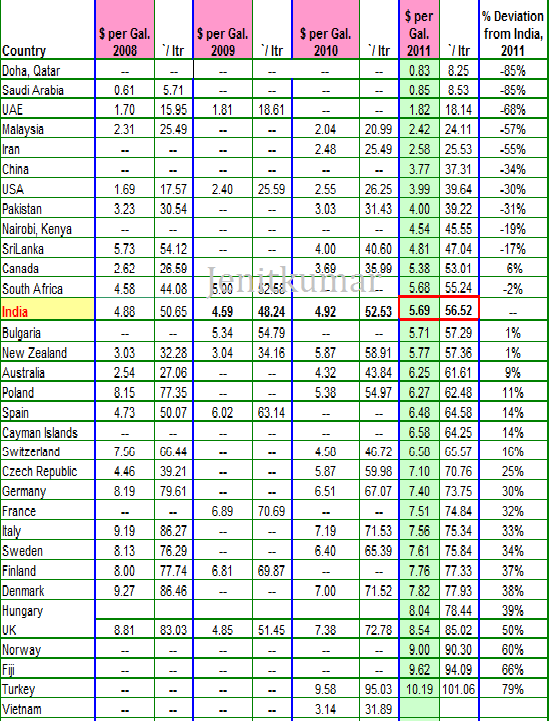