The 2.5-inch OCZ Vertex 4 SSDs features sequential bandwidth up to 535 MB/s, maximum random performance up to 120,000 IOPS, and with incompressible data, delivers 95,000 4K random read IOPS and 85,000 random write IOPS. The Vertex 4 also generates best in class latency as low as 0.04ms for read operations and 0.02ms for write operations, delivering an improvement of approximately 80 percent over the Vertex 3. According to OCZ, in typical use case scenarios, the Vertex 4 outperforms the Vertex 3 by as much as 400 percent.

The 2.5-inch Vertex 4 will come with a 3.5-inch adapter for desktops. Ryan Petersen, CEO of OCZ Technology, spoke about the new SSD architecture:

“The Vertex 4 represents an evolution in SSD technology and is a milestone product, delivering maximum performance and the highest NAND flash durability to date while eliminating the tradeoffs typically associated with on-the-fly data compression in MLC-based SSDs. We have raised the bar with an SSD product that delivers the ultimate in performance, regardless of data type, and for the first time ever, provides high read and write IOPS performance all on the same SSD platform.” 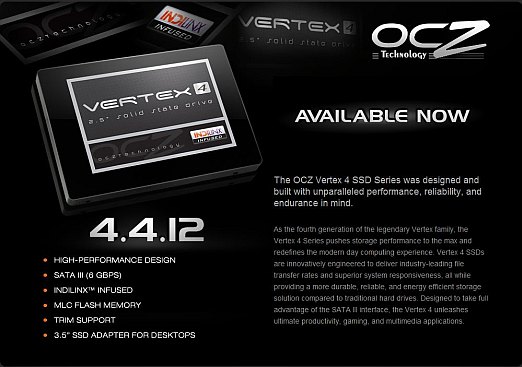