Microsoft Office 2013 preview: details, screenshots :
It's been about three years since Microsoft unveiled a new version of Office, and particularly with Windows 8 just months away from dropping, the software has been well overdue for an upgrade. Today, Redmond unveiled the latest edition -- Office 2013 (aka Office 15) -- which the company will be showing in a preview stage until the final version goes on sale.
Perhaps the biggest news isn't any single feature Microsoft's added to Word (hello, easy YouTube embeds!), but how and where you'll access your files. With this version, the company is moving to a subscription-based model wherein your Office files are tied to your Microsoft ID. Once you sign up, you can download the various desktop apps to a certain number of devices and, as with Windows 8, your settings, SkyDrive files and even the place where you left off in a document will follow you from device to device. (It's telling, we think, that files now save to the cloud by default.)
As you'd expect, too, this version is also more tablet-friendly than editions past, with a touch mode that widens the spacing between onscreen objects and flattens menus. In Word and PowerPoint, you'll also find a read-only mode that turns documents into full-screen editions, whose pages you can swipe through as you would an e-book or digital magazine.
Of course, Microsoft included plenty of granular updates like PDF editing and a behind-the-scenes Presenter View in PowerPoint. Fortunately for you, curious power users, we've been spending the better part of a week testing the software on a Samsung Series 7 Slate loaded up with Windows 8. 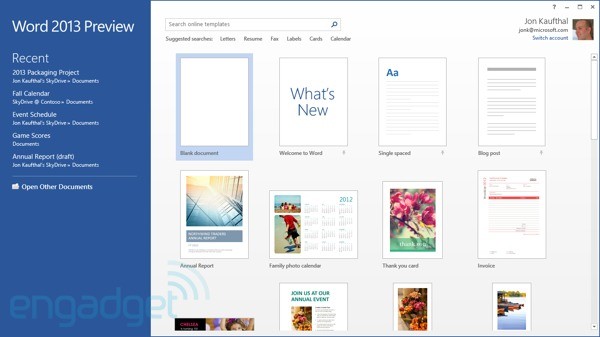 Microsoft would completely overhaul Office ahead of the Windows 8 release, let's put it this way: if you could survive the transition to Ribbon menus in Office 2007, you'll quickly feel at home here. The Ribbon is, indeed, still the cornerstone of the Office experience, the visual metaphor permeating Word, Excel, Outlook and every other application in the suite.

Nonetheless, Microsoft has made some subtle changes to the UI, and they're all quite important. For starters, no matter what app you're using, you'll find your name and Microsoft account photo in the upper-right corner -- a reminder that the cloud is now the linchpin to the Office experience. From there, you can click the photo to adjust your account settings, swap in a new picture or even switch accounts

Requirements:
This might be a good time to clarify the minimum hardware requirements. So long as you have 3.5GB of free disk space and an X86 or X64 system clocked at 1GHz or higher, you should be good to go. DirectX10 graphics are required, along with a minimum resolution of 1024 x 576. Microsoft also recommends 1GB of RAM for 32-bit systems, and 2GB for 64-bit machines.

Features:
1.Touch mode
It's easy to imagine that, with the press of a button, Office would somehow take on more of a Metro-inspired look, with large, finger-friendly icons and -- dare we say it -- a more dumbed-down interface. Actually, the adjustments Office makes in touch mode are far more subtle. In short, enabling this mode widens the spacing between onscreen objects, making it less likely that you'll tap the wrong thing. This mode also causes various menus to flatten so that you can see options with less finger input involved. Again, that doesn't mean the objects on screen suddenly become larger to accommodate finger input, but this mechanism at least cuts down on the amount of tapping you'll end up doing.

3.Live Layout and adding online video:
It's not like you couldn't previously add online video to an Office document, but it was a pain -- hardly a beginner-level move. Now, Word allows you to insert clips directly from YouTube, Bing Video or any other site, so long as you have the HTML embed code handy. Just click the Insert tab in the Ribbon, then click – you guessed it – "Online Video." Again, if we wanted we could paste in some code from Viddler, Engadget's hosting site, and insert a review video we had already uploaded. For the purposes of this walkthrough, though, we'll pretend we're searching for something on YouTube.

When you search, the results appear in a small pop-up that obscures the screen (not a browser pop-up, but a dialog box within Word). All of the search results appear as small thumbnails, and if you hover over them, you can see the title of the video (how else are you supposed to know if you've got the auto-tune remix?). Helpfully, you can also see how long a video is, so if you were looking for a music video, say, you might have an easier time weeding out the 50-second ones that obviously aren't complete. You can also preview the video first so that you don't go through the hassle of embedding it only to realize it's not what you wanted.

Once you insert the video, it's easy to resize it by dragging the corners or sides. There are also little pop-up tabs next to the frame, which you can click to select a layout option (e.g., in line with the text) or do things like cut or copy it. In theory, you can also watch a video from inside Word, without having to open up the browser. It doesn't bode well, though, that the first video we inserted had its permissions set in such a way that we had to visit YouTube if we were going to watch. Unfortunately, there's no way of clarifying that before you insert a video.

Also, in a new feature called Live Layout, the text will automatically wrap itself around a video, chart or anything else you insert into the text. And that happens in real time, even as you drag the object around. This is what we mean when we talk about Office's solid performance: as impressive as these new features are, they feel remarkably lightweight and nimble.

4.Editing PDFs:
For a while now, Word has allowed users to save finished docs as PDF files. But until now, doing the opposite -- editing a PDF -- has required additional software, much of it not free. Here, though, when you open a PDF you can edit it as you would a Word document, and then you can either save it as such, or save it as another PDF file. We had no problem taking a PDF email attachment, typing in additional material, saving it as a PDF and then viewing it in Windows Reader. Okay, depending on who you are this might not be the most exciting new features in Office 2013, but it is certainly one of the most useful.

Look and feel:
When you open Word for the first time, you'll notice some changes to that introductory start page. Now, the left-hand pane shows recent documents, while the area to the right showcases templates, some of them new. Of course, the thing you'll probably want most – a blank document – is still sitting in an easy-to-spot corner, toward the top of the screen.

Head on into a blank document and you'll see the Ribbon UI has made room for a new Design tab, which claims to let you make all your design changes in one place. Options include things like fonts, paragraph spacing, themes and adding watermarks to documents. Thankfully, though, Microsoft kept the feature where if you highlight text and then hover over it with your mouse, you'll see some pop-up controls right there, allowing you to change the font color and make other simple tweaks.

Microsoft hasn't revealed any pricing information for Office 2013, though it has outlined the different forms Office will take. There will, of course, be the web-based service Office 365 along with the desktop Office 2013 suite. Additionally, Office will be available on ARM-based tablets running Windows RT -- albeit, with Word, Excel, PowerPoint and OneNote only. Finally, enterprises can purchase a server-specific version capable of hosting Exchange, SharePoint, Project and Lync. In cases such as those, businesses can choose cloud hosting, local servers or a combination of the two. 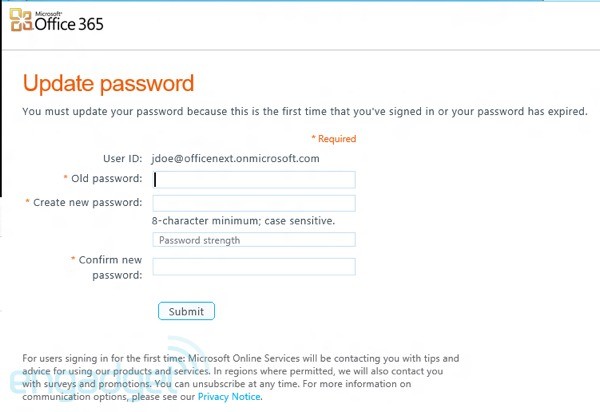 Consumer Preview here : http://www.microsoft.com/office/preview/en
And A more like Windows8 GUI
I

Ooh man, now they are trying to give Office the highly overrated Metro look...

Well, lets see how it works out !