HTC One S to hit Indian market in May

HTC recently launched its new flagship smartphones One X and One V in the Indian market. HTC is now planning to launch another One-series smartphone, One S in the country. According to reports, the HTC One S will arrive in India next month.

To refresh your memory, the HTC One S, previously known as the HTC Primo, runs on the latest Android 4.0 Ice Cream Sandwich platform and is powered by a 1.5 GHz dual-core processor. The HTC One S sports a 4.3-inch with 540 x 960 resolution, 8MP rear camera, VGA frontal camera and 1GB of RAM. It has an internal storage of 16GB. The device also supports NFC, Wi-Fi, DLNA, micro-USB 2.0 and HDMI. It has a 1,650 mAh battery. Read full specifications of the HTC One S here.

HTC had unveiled a new line up of smartphones – HTC One S, E and X at the MWC event held earlier this year.. HTC had announced it would launch the devices in April this year. The HTC One X, previously known as the HTC Edge and HTC Endeavour, features a 1.5GHz quad-core Tegra 3 processor, a 4.7-inch 720p HD display, and an 8MP f/2.2 camera, and Bluetooth 4.0 connectivity. The One X also has a 1.3 megapixel front camera. The device is available online (Flipkart) for Rs. 37,899.

The HTC One V is said to be a mid-range device running the latest Android 4.0 ICS platform. It sports a 3.7-inch touchscreen with 480 x 800 resolution. Powered by a 1GHz processor, the One V has 512 MB of RAM. The phone has 4GB of total storage, expandable via a micro SD card. It has a 5MP camera. The phone is available online (Flipkart) for Rs. 18,299. 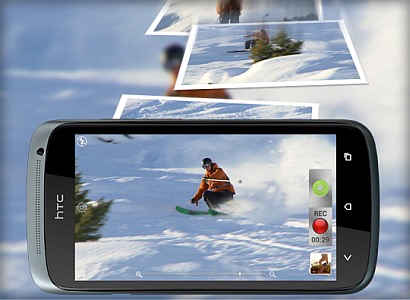