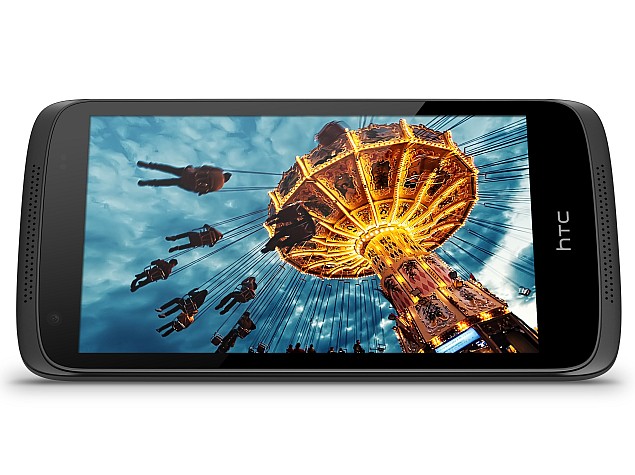 HTC has launched the Desire 326G Dual
SIM in India, priced at Rs. 9,590. The
budget smartphone from the Taiwanese
manufacturer will be available to
purchase from Thursday, and comes wit
launch offers of 3 months unlimited
music and video downloads from
Hungama, and discounts worth Rs.
5,000 from Myntra.

The HTC Desire 326G Dual SIM was
introduced for India alongside the HTC
One E9+ and the HTC One M9+ back in
April. Of the three phones, only the One
M9+ was given a launch date and a
price - Rs. 52,500. The pricing details of
the other two were then withheld, and th
smartphones were given a launch date o
late-May. Both phones have now been
made available slightly later than
expected, in early-June.

The Taiwanese smartphone maker says
the Desire 326G Dual SIM is "built on th
foundations of the popular HTC Desire
526G+ series with new vibrant colours."
It will be available in White Birch and
Black Onyx colour variants in India.

The Desire 326G Dual SIM runs Android
4.4.2 KitKat with Sense UI, and features
a 4.5-inch display with an FWVGA
(480x854 pixels) resolution. It is
powered by a quad-core Speadtrum
SC7731G processor clocked at 1.2GHz,
and coupled with 1GB of RAM.

The smartphone houses an 8-megapixel
rear camera and a 2-megapixel front-
facing camera, both of which include a
BSI sensor. The rear camera comes with
features like burst mode, smile to
capture, and more. Recording of full-HD
(1080p) videos is also possible. Backed
by a 2000mAh removable battery, which
is rated to deliver up to 11 hours of talk
time and 386 hours of standby time on
3G, the HTC Desire 326G Dual SIM sport
8GB of inbuilt storage, which can be
further expanded via microSD card (up t
32GB)

Measuring 139.7x69.6x9.7mm, the
smartphone weighs 146 grams and
includes regular connectivity features lik
Bluetooth 4.0, 3G, Wi-Fi, GPS and Micro
USB 2.0. Some of the other features
onboard include HTC BlinkFeed, HTC Zoe
and an Easy Mode that simplifies the
Desire 326G Dual SIM's home screen.

Commenting on the launch, Faisal
Siddiqui, President, HTC South Asia, said
"The Desire 326G Dual SIM is a great
phone for everyday, we have created a
classy and stylishly design smartphone
with great features. HTC Desire 326G
Dual SIM is made of strong
polycarbonate material, and is designed
to fit just nice in your hands. It is also
comfortable to hold and featured packed
at an incredible value, a phone for
everyone."