Box.net announced new integration with Google Docs today. The move combines the online, cross-platform storage of Box.net with the Web-based productivity applications of Google Docs to deliver an online content and collaboration solution to rival Microsoft Office 365 and the features of SharePoint.
Box.net co-founder and CEO Aaron Levie explains in an Inside the Box blog post, "Beginning today, Box's 6 million users can easily create and collaborate on Google Docs and Spreadsheets from within Box, as well as edit the existing 50M+ Word and Excel files already stored on our platform. Google Docs enable entirely new forms of collaboration--like concurrent editing--that are impossible within desktop applications, and now these capabilities are easily available to Box users."


Box.net is integrating Google Docs functionality right into the online file storage service.
"We're moving towards a future where cloud documents eclipse those tethered to desktop applications, and at Box, we're accelerating this shift for our entire user base by bringing Google's collaborative documents to Box's content management," said Levie in the Box.net press release announcing the Google Docs integration. "The true power of the cloud is unlocked through deep integrations such as this, and we're betting that platforms built around openness will triumph over the closed, proprietary approach that enterprise vendors have traditionally embodied."

That "closed, proprietary approach" is a thinly-veiled shot at Microsoft. Microsoft has been promoting the upcoming Office 365 service for some time now. Office 365 is expected to officially launch at a Microsoft event in New York on June 28, and includes Microsoft Office tools, as well as Exchange, Lync, and SharePoint. With per-user pricing that is quite reasonable compared with implementing and maintaining the necessary infrastructure internally, Office 365 paints a compelling business case.

One area where Microsoft lags the Box.net / Google Docs alliance, though, is in cross-platform functionality. Microsoft is working diligently to extend Office 365 to platforms beyond just Windows PCs and Windows Phone 7 smartphones, but it is playing catch-up to entities like Google and Box.net that have staked their entire business model on delivering Web-based, platform-agnostic solutions.


Microsoft Office 365 is expected to launch officially at a Microsoft event in New York next week.
Microsoft seems intent on steering individual consumers to use the SkyDrive online storage, and for organizations using Office 365 to embrace the SharePoint functionality. Those are both viable solutions for online storage and collaboration, but trying to corner customers into using Microsoft-centric solutions could lead some organizations to seek alternatives. This is especially true of companies that have already invested time and effort on some other cloud storage service like Box.net, Dropbox, or SugarSync.

My own experience with Google Docs demonstrates that Google still has some work to do when it comes to maintaining document formatting for Microsoft Office file formats. But, the fact that my files are currently backed up and stored on Box.net puts me in the middle of this little soiree. I prefer Microsoft Office and Microsoft Office 365 to Google Docs, but I don't really want to move all of my files or be forced to use Microsoft solutions.

Ideally, Microsoft would open up the API and let third-parties like Box.net integrate with Office 365 so that the tools of Office 365 can work seamlessly with the file storage of Box.net.
B

Bad spelling reflects badly on you. Doesn't matter if it appears in a product brief or a presentation; if you write "it's" when you should have used "its" or accidentally type "loose" in place of "lose," you're going to come off looking, well, not too bright.

Help is at hand for Google Docs users. Thanks to a new update, Google Docs now offers Web-powered spell checking.

See, when you type a misspelled query into Google Search, an adaptive, context-sensitive system comes up with suggested corrections: "Our suggestions get smarter and smarter based on the words Googlebot sees as it explores the web," according to Google software engineer Yew Jin Lim.

That same system (or one quite like it) now powers the dynamic spell-check in Google Docs--specifically, in documents and presentations. As you type, the checker immediately flags (with a red underline) any word that's either misspelled or improperly used.

That's right: If you typed "your" instead of "you're," Docs will flag the former and suggest the latter--even though the former is spelled properly. In that sense, it's like having a grammar checker as well as a spell checker.

Google also promises to keep up with modern pop-culture lingo and other new words.

Slowly but surely, Google Docs is evolving into a viable substitute for Microsoft Office. With this update, it just got a little closer.

Google has given a facelift to its web-based office suite and data storage service, Google Docs, by adding 450 new fonts, 60 new templates and a host of other features.

"Often the best way to get your point across is to present your idea in a creative, captivating way," Google software engineer Isabella Ip wrote in a company blog post. "Today, we added over 450 new fonts to Google documents to make it easier for you to add a little something extra to whatever you create."

To choose new fonts, users need to click on the font menu in Google Docs and choose, “add fonts” options. The link directs users to a database of all the web fonts available for Google Docs. The new fonts are also offered on Google's Web Fonts site for designers. 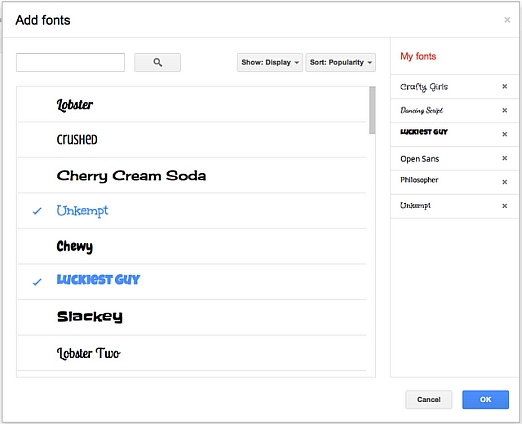 In addition to hundreds of new fonts, Google has added a lot of new features as well - There are now a few more options for inserting images in Docs, including inserting from Google Drive, searching for images from the LIFE Photo archive, or taking a snapshot with your webcam. Also, charts in spreadsheets now has support for minor gridlines and options to customise the formats of axis labels. Moreover, Google Docs now supports screenreaders in presentations.

ya but google drive software crash @ some times
M

yes hate to use better to use Dropbox or Skydrive
I

For that matter, Dropbox is best !
S

Google has added a “research pane” feature in its Google Docs, which helps users in searching any specific information on the search engine without leaving the Docs. Users can access the research pane from the Tools menu by right clicking on a selected word that users want to learn more about or use CTRL+ AlT + R (for Windows) shortcut.

Google Docs users also have the option to include being able to search all of Google, or restrict searches to images and quotes. The research pane is placed at the right of your document.

“From the research pane, you can search for whatever info you need to help you write your document. With just a couple clicks you can look up maps, quotes, images, and much more,” said Google software engineer Sarveshwar Dudd in a blog post. “If you find something you like, you can add it by clicking the insert button or, for images, by dragging them directly into your document. If appropriate we'll automatically add a footnote citation so there's a record of where you found the info.” 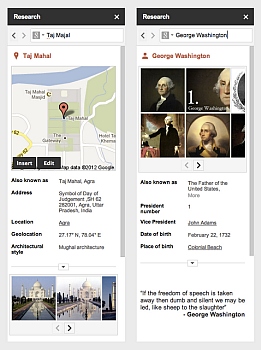 The new “research pane” feature is the latest in a series of updates Google has been working on its products of late. Google recently gave a facelift to Google Docs, by adding 450 new fonts, 60 new templates and a host of other features. The Internet giant also upped the Docs' storage to 5GB.

Google’s status page had showed that itsfile-sharing services such as Drive, Docs,Sheets, Slides and Classroom were facing disruptions -- but it has all been resolved.TweetGoogle Drive went down for a few hours yesterday and caused the world to go bonkers, but the company says that all issues have now been resolved.Google’s status page had showed that its file-sharing services such as Drive, Docs, Sheets, Slides and Classroom were facing disruptions.“The problem with Google Drive should be resolved,” the companysaidon an update to its page at 5:30 p.m. ET.Google, which has now morphed intoholding company Alphabet Inc, also acknowledged the disruption in a tweet on its Docs page

S
Too many err_timed_out, too frequently. What to do?

Google Docs, Sheets and Slides and more will count towards storage limit from 1st June 2021