The comments on that reddit link are absolutely hilarious, especially the first one about patriotism!!

After hasty withdrawal, Ramdev's Kimbho app set for a comeback - Times of India

“We pledge not to launch the app until a team of expert hackers and security specialists plug all the security and privacy loopholes,” Balkrishna said in a phone interview as he promised more advanced features than his rival.
Click to expand...

Remember the Kimbho app, which was pegged as Baba Ramdev’s competitor to WhatsApp in India? That app is back in a new avatar and now it’s called Bolo Messenger. The developer, Aditi Kamal has reached out to the media, sharing details about the so-called safe-and-secure messaging app. Unlike the last time, Bolo Messenger now has a functioning website, which lists out the features and what the app will offer, especially becoming the WhatsApp alternative people might want to try.

Interestingly, the rechristened Bolo Messenger has no mention of Baba Ramdev’s or Patanjali’s affiliation with the product. The company name has also been changed to Bolo Bharat Communication. The app will run on phones with Android 4.1 Ice Cream Sandwich or later.

"Gangadhar hi Shaktimaan hai" (Gangadhar is Shaktimaan). At first they launched Kimbho app which was actually the Bolo app from within. Now they have dropped the name Kimbho and decided to use the original name "Bolo". This is the condition of Indian IT sector. You have to code for years, and a 1000 times, fail miserably, get your eyes mashed till u lay ur hands on a commercial project such as Baba Ramdev's. You may have ur opinions about Ramdev. But this lady Aditi Kamal has brought only shame to Ramdevji as a Businessman. That lady now argues that Indians are bringing shame to their own country, which is quite the opposite. Again this "Bolo'' app still has security issues and using it is not advisable. 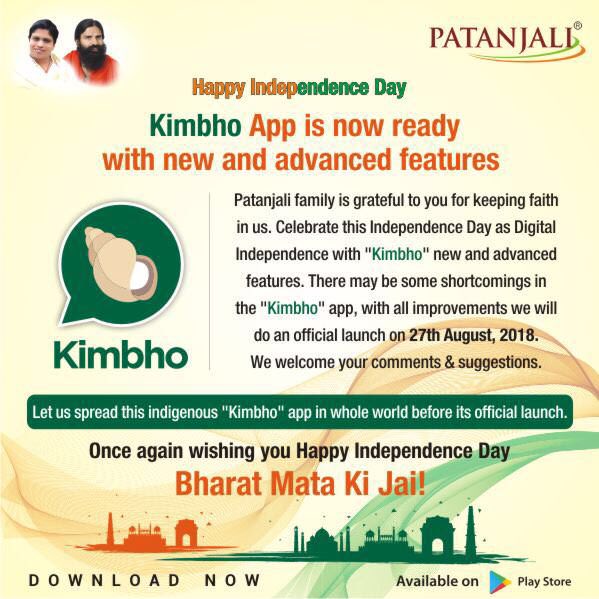 Still its showing Bolo app on top in search results. Let just its going to be something intresting this time and soon Kimboo take over the Whatsapp India. If theyll introduce some cash back offers it would be gr8!
M

Today I got SMS from Kimbho...

In pics | Bend it like Baba: Ramdev on the field to promote Modi’s pet-projects