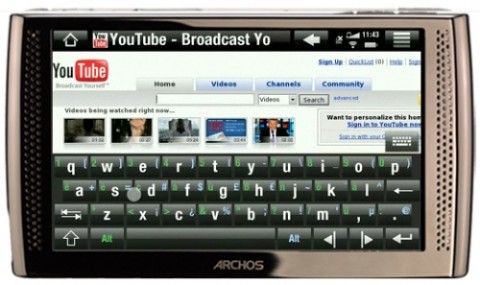 PARIS: France's Archos expects to increase sales by more than half this year, driven by the launch of new entry-level tablet computers as it takes on the dominance of Apple's iPad, its founder and chief executive told Reuters.

Revenue should exceed 260 million euros ($341 million) this year after more than doubling to 171 million euros in 2011, Henri Crohas said in an interview.

Archos, which is European leader in tablets using Google's Android operating system under 400 euros and one of the top five players worldwide, sold some 1.6 million tablets last year compared with 35 million for Apple.

The company is banking on the launch of two new ranges - the budget Archos Elements devices and the Gen 10 xs, the world's thinnest tablets with a lid that turns into a keyboard - to drive sales in the second half of the year.

"Growth will continue at the same pace and this could also continue in the years to come," said Crohas, who has forecast 1 billion euros of sales in 2014.

Archos' focus on cheaper tablets from 100 euros has helped it grab a bigger share of the growing market, Crohas said.

Apple, which has two-thirds of the tablet market, unveiled its third-generation iPad last week, with a crisper display and an array of technology advances. The wi-fi only version starts at $499 in the US.

Founded in 1988, Archos started by selling memory cards and moved to MP3 players in 2000, but before long, Apple's iPod stole the show. In 2009, Archos raised capital through a share issue and diversified with the first ever Android-based tablet.

China listing
The newest entrant, Amazon.com Inc, which sold 3.5 million tablets in the last quarter of 2011, is perhaps the most worrying for Archos if it successfully enters the European market as it focuses on products below 300 euros.

But Archos is betting on its Google certification, giving access to the search engine's apps such as Gmail or Google maps.

From June, it is expected to launch a range of extra-slim tablets - 7.5 mm thick against 9.4 mm for the newest iPad - as well as Archos Elements tablets under 200 euros, all certified by Google.

Archos is also banking on its cheaper Arnova brand, developed at its Chinese unit and targeted at emerging markets, and which already generates more than a third of sales.

The company, which employs more than 200 people, with half in France, also has 50 engineers in China who work at its Archos Technology Shenzhen division.

Crohas travels there once a month to pursue its plans of a joint venture and a stock market listing in the hope of "conquering the Chinese market".

"It is still on the agenda but it is difficult. We are still working on getting Archos listed on Shenzhen's stock exchange but we have not found the right investor," Crohas said.