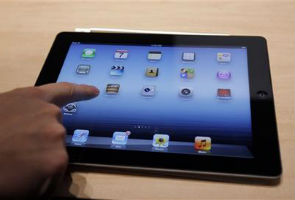 In announcing the new iPad, Apple CEO Tim Cook described a "post-PC" revolution that surprised even the company.

"The momentum behind iPad has been incredible and has surprised just about everyone," Cook said, adding later that the device is "outstripping the wildest of predictions."

Cook said Wednesday that Apple sold 172 million "post-PC" devices last year, which comprised iPods, iPhones and iPads. The company says that in the last three months of 2011, about 85 percent of its revenue came from those devices.

Apple revealed a new iPad model Wednesday with a sharper screen and a faster processor. It goes on sale next week.

The popularity of smartphones and tablet computers have hurt sales of traditional computers in the U.S. and other industrialized countries as consumers delay replacing their desktops and laptops.

Other manufacturers have come out with their own tablet devices with limited success. According to IHS iSuppli, Apple had captured 62 percent of the worldwide tablet market last year. Samsung Electronics Co., maker of the Galaxy tablet line, was second with 9 percent, followed by Amazon.com Inc., maker of the Kindle Fire, with 6 percent.

Cook says Apple sold more iPads than any single vendor sold traditional PCs in the last three months of 2011. Apple sold 15.43 million iPads in that quarter. Research firm Gartner estimates that the leading vendor, Hewlett-Packard Co., shipped 14.7 million PCs worldwide in the same period. Some 92 million PCs were shipped by all vendors in that time frame.

HP and other PC makers are also hoping Windows 8 will boost sales of traditional PCs.

A
Seeking Help Issue with my PC