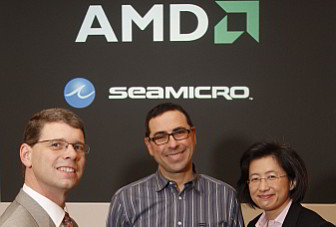 In a bid to get in on the fast growing low-power server market, AMD announced a deal to acquire SeaMicro, a startup in the field, for $334 million. SeaMicro’s CEO, Andrew Feldman, will head AMD’s new Data Center Server Solutions business.

SeaMicro is best known for its processor-agnostic supercompute fabric technology, which effectively ties together thousands of different types of processor cores in a server system. It is considered an essential building block in future cloud infrastructure, making its acquisition a great way for AMD to get a hold on the quickly growing market.

Speaking to media, Feldman described the benefits of his company’s technology, emphasizing that it would uniquely allow servers to carry both Ethernet and disk traffic, even with their “very different requirements."

The technology would allow AMD’s next generation server fabric offering to incorporate a wide variety of processors, both x86 and ARM. SeaMicro had recently announced its first 64-bit Intel Atom-based servers, and it is not known just how AMD will deal with the business.

A
NPCI launches international arm, NIPL for adoption of UPI, RuPay Card in other countries