Aircel to launch iPhone 4S on Nov. 25; no word on price yet

It's official – the iPhone 4S is coming to India on November 25.
Aircel has announced on its official Facebook page that it is going to launch the long-awaited iPhone 4S on Nov. 25. Meanwhile, reports suggest Airtel is also going to launch the device around the same time. However, Airtel has refrained from disclosing the exact date. Moreover, both the telecom operators have not yet revealed the price. According to BGR India, the 16GB variant of the iPhone 4S will be priced around Rs. 40,000. 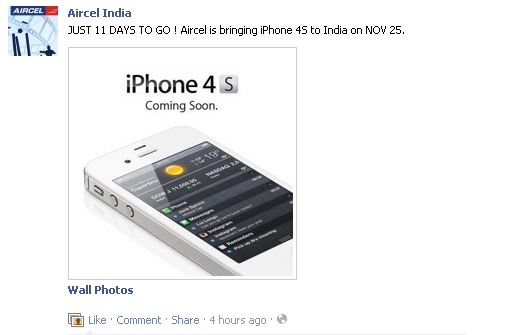 Earlier, telecom operators Airtel and Aircel announced they will be launching the iPhone 4S in India. The launch of the iPhone 4S comes nearly a month after Apple launched the device in the US. It may be recalled that Apple had launched the iPhone 4 in India nearly a year after its launch in the US.
The iPhone 4S comes with a dual-core processor, an 8MP camera and intelligent voice recognition software Siri. The iPhone 4S' popularity has been marred by its battery issues. Apple recently released iOS 5.0.1 after a number of the iPhone 4S complained about the battery life. The update is supposed to have feature many improvements and bug fixes to the platform however, across iOS devices.

Article Star India to launch Hotstar in Singapore on November 1