Airtel and Aircel are in a race it seems, both announced that they will launch iPhone 4 almost simultaneously, both have the same launch date, and now they have announced a very similar plan. 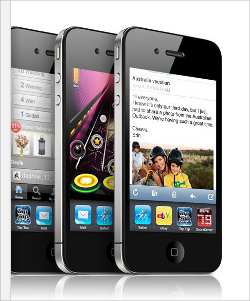 The iPhone 4 comes with a sleek, sharp and thinner design than its predecessor. The fourth-generation model of Apple iPhone comes with a 3.5 inch screen with 640 X 960 pixel resolution known as the Retina display, the highest resolution display ever built into a phone, and FaceTime for video calling.

The phone has iOS 4 as its operating system, which offers features like multitasking, spell check, folders, iBooks and a host of cool new features.

The phone has a 5 megapixel camera as compared to the 3 megapixel in the earlier version. The camera has an LED flash also for illumination and it has a front VGA camera to support video calling.

The iPhone 4 comes with a price tag of Rs 34,500 for the 16 GB model, and Rs 40,900 for 32GB model along with tariff plan options available in both prepaid and postpaid versions.

Seeking Help Not able to receive messages on iPhone 13