US cloud computing report slams Brazil, India, China​
WASHINGTON: A US software industry report on Wednesday chided Brazil, China and India for policies it said threatened the future of cloud computing, but also took aim at developed countries such as Germany that did well on its inaugural scorecard.

The Business Software Alliance, which represents US industry heavyweights such as Microsoft Corp, said Brazil finished last in its survey of 24 countries, earning only 35.1 points out a possible 100 because of its policies in areas such free trade, security, data privacy and cybercrime.

India, which has the world's second-largest software industry after the United States, and China, whose information and communications technology sector is expected to nearly double to $389 billion by 2015, also were in the bottom six, with scores of 50.0 and 47.5, respectively.

Cloud computing refers to providing software, storage, computing power and other services to customers from remote data centers over the Web. Demand for cloud-based software is rising rapidly because the approach allows companies to start using new programs faster and at lower cost than traditional products that are installed at a customer's own data center.

A major purpose of the report is to rally the international "technology community around the need for greater harmonization of laws so a truly global cloud can come about," said Robert Holleyman, president of the US software group.

Without greater coordination of government policies, "the cloud could be chopped into little pieces," reducing the efficiency that comes from being able to move data and software services freely across borders, Holleyman said.

The 24 countries included in the survey represent 80 percent of the global information and communications technology industry. They were scored in seven areas, which also included intellectual property protection, infrastructure and support for industry-led standards to promote smooth data flows.

Japan was ranked highest with 83.3 points. It was followed closely by other developed countries including Australia, Germany, the United States, France, Italy, the United Kingdom and South Korea, which all scored in the high 70s.

While the report showed a "sharp divide between advanced economies and the developing world, even some of the high-ranking countries are walling themselves in with conflicting laws and regulations," Holleyman said. 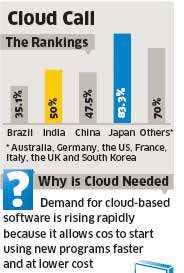 European Union countries scored well, but "what's happening now in the EU is lawmakers and regulators are effectively putting their thumbs on the scale in ways that will make it difficult for non-European firms to compete," he said.

"There are concerns that Germany, for example, wants to put a wall around the country to limit the provision of cloud services to companies that are located in Germany."

Strong laws to protect privacy are important to give users confidence "that private information stored in the cloud, wherever in the world, will not be used or disclosed by the cloud provider in unexpected ways, the report said.

Tough security measures are also needed, but some countries such as China that have implemented Internet filtering or censorship regimes could thwart develop of cloud computing and the digital economy, the report said.

Brazil scored just 1.6 out of a possible 10 on policies to combat cybercrime, which is expected to become an increasing challenge as more and more information is aggregated in large data centers, making them tempting targets.

Japan and France earn perfect marks in that section, while South Africa came close with a 9.8.

Even though Brazil finished dead last in the report, Holleyman said he was more optimistic about the potential to persuade Latin America's second largest economy to make reforms than he was for China.

"There is probably more opportunity to make progress in Brazil by pointing out what we see as the gaps that exist currently and why Brazil's economy will slow down as result of these policies," Holleyman said.

"I think it's going to be a bigger challenge in some other markets, particularly China," he said.

China "not only has the 'great firewall,' that does not allow the transmission between people in China and the rest of the world. But it also has a policy to require non-Chinese cloud firms to enter into joint ventures with Chinese firms" on unfavorable terms for outsiders, he said.

India also appears to recognize it is in its interest to promote global cloud computing, Holleyman said.