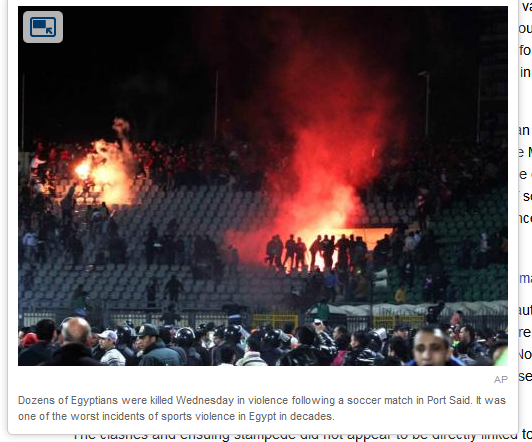 CAIRO (AP) – At least 74 people were killed and 248 injured after soccer fans rushed the field in the seaside city of Port Said Wednesday following an upset victory by the home team over Egypt's top club, setting off clashes and a stampede as riot police largely failed to intervene.

It was a bloody reminder of the security vacuum that faces the Arab world's most populous country as instability continues nearly a year after former President Hosni Mubarak was swept out of power in a popular uprising.

The melee — which followed an Egyptian league match between Al-Masry, the home team in the Mediterranean city, and Al-Ahly, based in Cairo and one of Egypt's most popular team — was the worst cases of soccer violence in Egypt and the deadliest worldwide since 1996. One player said it was "like a war."

In Cairo, another match between Al-Ismaili and Zamalek was halted by authorities because of the Port Said violence, and fans angered by the move set fire to the bleachers at the main stadium in the Egyptian capital, authorities said. No injuries were reported and employees said firefighters put out the blaze before it caused much damage.

The clashes and ensuing stampede did not appear to be directly linked to the political turmoil in Egypt, but the violence raised fresh concerns about the ability of the state police to manage crowds. Most of the hundreds of black-uniformed police with helmets and shields stood in lines and did nothing as soccer fans chased either, some wielding sharp objects and others hurling sticks and rocks.

Security officials said the ministry has issued directives for its personnel not to "engage" with civilians after recent clashes between police and protesters in November left more than 40 people dead.
Click to expand...

More Info and a Video here
I

sad news for egyptian country.
I

stampade is very bad, but unfortunately, it keeps on happening again and again...
N

Breaking 6 died during riots in Indonesia over Election Results
2