Sometimes Apple releases a device that Windows users can’t help but drool over a little. At the moment, that device has to be the MacBook Air. But we don’t have to wait much longer until it looks a little less sexy next to a true competitor from Asus. 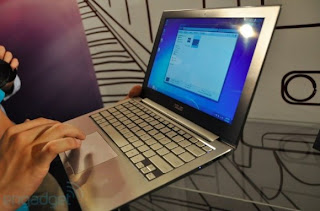 Like the Air 11-inch, the UX21 has a sloping design, which starts at 7mm in the back and tapers to 3mm once you reach the front bezel. It tips the scales at 2.2 pounds, which is exactly what the Air 11-inch weighs. The 11.6-inch widescreen and 1,366x768 resolution are also consistent with the Air. It uses a similar Chiclet-style keyboard and glass touchpad, though I found the two mouse buttons a bit too resistant for my tastes. 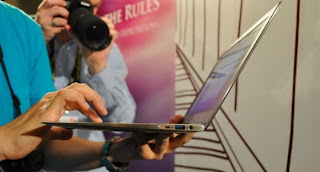 There are some subtle differences with regards to their feature sets. One of the UX21's two USB ports houses USB 3.0 technology (the Air 11-inch has two USB 2.0 ports). Instead of mini-DisplayPort, the UX21 has a mini-HDMI port. They both don't have built-in SD card readers, which would have been impressive had Asus pulled one off. Storage comes in SSD varieties: 64GB or 128GB. Asus also claims that with these drives, the UX21 can resume from sleep in two seconds. 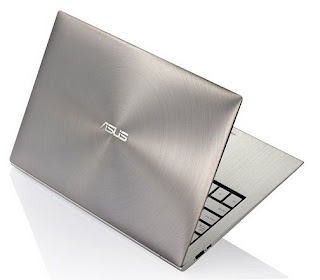 The UX21 that was on display ran on an Intel Core i5-2557M (1.7GHz) processor, which means it's a standard voltage variant and more powerful than the low-voltage ones found in the Samsung Series 9 and MacBook Airs. Asus also claims that it can scale as high as a Core i7, though it didn't say which one. With a standard volt processor, battery life becomes a concern. And given its size, a more powerful CPU, and the fact that the battery is completely sealed in means that we're looking at no more than five hours.

Price is yet announced and release date also.