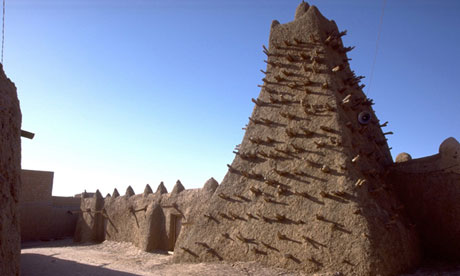 Islamists armed with Kalashnikovs and pick-axes have destroyed the centuries-old mausoleums of saints in the Unesco-listed city of Timbuktu in front of shocked locals, witnesses say.

The attack by the al-Qaida-linked Ansar Dine group came days after Unesco placed Timbuktu on its list of heritage sites in danger and will recall the 2001 dynamiting by the Taliban of two sixth-century statues of Buddha carved into a cliff in Bamiyan in central Afghanistan.

"They are armed and have surrounded the sites with pick-up trucks. The population is just looking on helplessly," said a local journalist, Yeya Tandina.

"The mausoleum doesn't exist any more and the cemetery is as bare as a soccer pitch," a local teacher, Abdoulaye Boulahi, said of the Mahmoud burial place.

"There's about 30 of them breaking everything up with pick-axes and hoes. They've put their Kalashnikovs down by their side. These are shocking scenes for the people in Timbuktu," said Boulahi.

Ansar Dine backs strict sharia law, and considers the shrines of the local Sufi version of Islam to be idolatrous. Sufi shrines have also been attacked by hardline Salafists in Egypt and Libya in the past year.

Locals said the attackers had threatened to destroy all of the 16 main mausoleum sites. The Unesco director general, Irina Bokova, called for an immediate halt. Late on Saturday, Tandina said Ansar Dine had halted the attacks. Attempts to contact members of the group were unsuccessful.

Ansar Dine has gained the upper hand over less-well-armed Tuareg-led separatists since the two joined forces to rout government troops and seize control in April of the northern two-thirds of the inland west African state.

The sites date from Timbuktu's golden age in the 16th century. Located on an old Saharan trading route that saw salt from the Arab north exchanged for gold and slaves from the south, Timbuktu blossomed as an Islamic seat of learning, home to priests, scribes and jurists.

Mali had in recent years sought to create a desert tourism industry around Timbuktu, but even before April's rebellion many tourists were being discouraged by a spate of kidnappings of westerners in the region claimed by al-Qaida-linked groups.

Unesco's world heritage committee said this week it had accepted the request of the Malian government to place Timbuktu on its list of endangered heritage sites.

"The committee … also asked Mali's neighbours to do all in their power to prevent the trafficking in cultural objects from these sites," it said.

The rebel seizure of the north came as the southern capital, Bamako, was struggling with the aftermath of a coup on 22 March.

Mali's neighbours are seeking UN backing for a military intervention to stabilise the country but security council members say they need more details on the mission being planned.