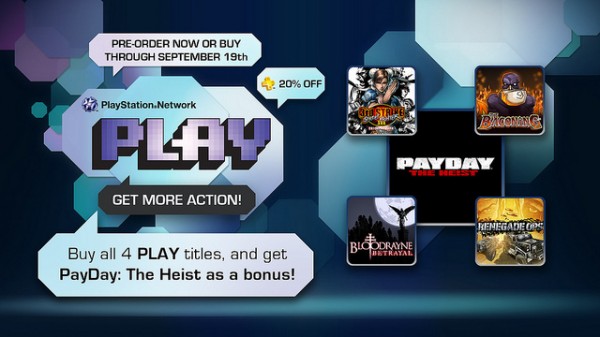 With Microsoft’s Summer of Arcade promotion becoming an annual success, Sony’s prepared an answer: the PlayStation Network PLAY program. Pre-orders for the program begin today (August 9), and the first game hits the PlayStation Store on August 23.

If you purchase a PLAY title during the promotion, you’ll receive downloadable content unique to that game. Pre-ordering a PLAY title will grant you a new theme, as well. Those with deep enough wallets for all four games will be given a voucher code for the PSN exclusive PAYDAY: The Heist – if they’re 18 years and older.

Included in the event are Capcom’s Street Fighter III Third Strike Online Edition, Hothead Games’ DeathSpank sequel The Baconing, Majesco’s side-scrolling platformer BloodRayne: Betrayal, and SEGA’s top-down vehicle shooter Renegade Ops. All four games will run $14.99. If you’d like to purchase PAYDAY: The Heist separately, you can for $19.99. PlayStation Plus subscribers will receive a 20% discount on all PSN PLAY titles.

It’s encouraging to see Sony putting effort into promoting its online store and attempting to rehabilitate its reputation in the wake of this year's massive PSN security breach. The PlayStation Store is full of indie gems like the PixelJunk series and Joe Danger, and programs like PSN PLAY can draw much-deserved attention their way.

Good News Sony is giving away free Uncharted and Journey