Saying traditional TV is dying in India is OTT assessment 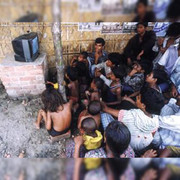 [font=Lato, sans-serif]On a recent road trip to Ladakh with friends we stopped at a nondescript roadside ‘dhaba’ (makeshift eatery) near the Himachal Pradesh and J&K border for tea and to stretch sore limbs. As tea was being boiled, stifled giggling from inside the hutment attracted me. While trying to see if my smart-phone was working so I could check-in on FB, I peeped inside. A group of local kids were enjoying a soap opera on television; courtesy DD FreeDish, a free-to-air DTH platform. My mobile phone, in the meanwhile, showed no signs of life with a No-Network message flashing.[/font]

[font=Lato, sans-serif]This, and many other such examples in India’s hinterland, highlight a fact loud and clear: India may be going digital, but Bharat (as non-urban hinterlands of India is referred to by some sociologists and marketers) still roots for the traditional. Such instances also tell us that in a country as diversified, complex and challenging as India, traditional habits, like TV watching, are there to stay despite technological disruptions like streaming video and smart-phones.[/font]

[font=Lato, sans-serif]Globally, death of traditional TV viewing has been predicted for past few years. But data and analytics from more mature and developed markets and even some East Asian nations - where digital is a big draw - show that TV as we know it is not going away anytime soon.[/font]

[font=Lato, sans-serif]A US Department of Labour Survey, released early 2016, states that watching TV was the leisure activity that “occupied the most time (2.8 hours per day), for those aged 15 and over.”[/font]

[font=Lato, sans-serif]BARB (UK equivalent of BARC India) data shows that average daily video viewing by all individuals is 4hrs 35mins and that TV accounts for 94 per cent of all video advertising time. Over the last decade, despite several “disruptive” technological developments, time spent watching TV has hardly dipped, as was being forecast. More importantly, TV continues to have largest reach of all media: it reaches 71per cent of population in a day, 93per cent in a week, and 98 per cent in a month.
And, these are markets with near total saturation of TV homes, and a highly developed and widespread digital eco-system.[/font]

[font=Lato, sans-serif]Appetite for more TV content is only bound to grow given that only 153 mn homes in India have TV out of a total of about 250 million (a penetration of about 60per cent). Rise in disposable incomes, increasing fragmentation of families and continued challenges of Indian infrastructure are bound to push TV viewing higher.[/font]

[font=Lato, sans-serif]India has close to 900 licensed channels and while Ministry of Information and Broadcasting (MIB) agrees some of these licensees may not be on air, but scores of applicants are in queue too --- another indicator of growth in appetite for TV.[/font]

[font=Lato, sans-serif]But, what about the perception that traditional TV viewership is losing out due to growth of digital platforms?[/font]

[font=Lato, sans-serif]Let’s look at BARC India data for a recent TV event, the Rio Olympics. TV viewership for Rio 2016 grew 2.65 times as compared to London 2012. While 16 million unique viewers watched the broadcast of London Games in India, the corresponding figure for Rio Games is 43 million (using the same viewership base - 1mn+ towns). If one looks at the all-India (Urban+Rural) base, Rio 2016 set another high of 203.8 million unique viewers.[/font]

[font=Lato, sans-serif]This brings us to cricket, India’s fav sports (apart from politics). BARC data shows that a new viewership high was achieved during an India-Pakistan ICC T20 World Cup match in 2016, which generated a whopping 80.5 million impressions across Star Sports Network and DD National. And these numbers came on the back of not just a larger number of people watching TV, but also considerable higher time spent on TV.[/font]

[font=Lato, sans-serif]When asked about linear TV’s impending death in India owing to digital’s growth, Colors CEO and President of the Advertising Club (of India) Raj Nayak waved away the analysis asserting, “I am ready to stick out my neck on this. People who say that traditional television is dying don't know what they are talking about. TV has been growing and there is still big headroom for its growth in India.”[/font]

[font=Lato, sans-serif]India may be adopting mobile phones faster than the US or other western countries, and a major percentage of them are smart-phones. Still, challenges for digital players are big and many ranging from costly data, indifferent bandwidth speed and getting the right content mix for a country that has 22 official languages and over 700 dialects.[/font]

[font=Lato, sans-serif]Data pointing to greater consumption of TV is one side of the picture. Globally, studies and data also indicate that TV remains a highly effective form of advertising.[/font]

[font=Lato, sans-serif]A study by the Institute of Practitioners of Advertising (UK’s equivalent of India’s AAAI) shows that TV continues to guarantee best commercial outcomes of campaigns for things such as sales, profit, market share, etc. Echoing similar sentiments, Colors’ Nayak added, “Digital advertising does not have the same impact that TV (advertising) has... Even Amazon, Google and other e-commerce companies have to use TV to make an impact.”[/font]

[font=Lato, sans-serif]US-based eMarketer (started in 1996 to study digital trends and considered one of the most widely cited research providers in the media) admits that despite a drop in TV watching time, in general, it hasn’t stopped marketers from pouring significant amounts of money into television advertising.[/font]

[font=Lato, sans-serif]Without discounting the strides being made by digital players in India (and they seem to be mushrooming all over like dotcoms during the dotcom boom of the late 1990s), traditional TV’s importance and reach still outstrips that of digital.[/font]

[font=Lato, sans-serif]Pointing out that digital does offer consumers choices of watching TV (government lingo for video consumption) at different time and in different formats, a senior government official, having worked at MIB, on condition of anonymity admitted that TV is not going away from India. Rather, the size of India will help it retain its pre-eminence as opposed to other media.[/font]

[font=Lato, sans-serif]GroupM too testifies to TV’s strong presence in India compared to other segments of media like print, OOH and digital. In projections made in January 2016, which are re-visited mid-year to do any course corrections if necessary, the company said television was estimated to grow by 17.6 per cent to touch Rs 27,074 crore (Rs. 2,7,0740 million) this year against Rs 23,022 crore (Rs. 23,02,20 million) last year as far as advertising spends go.[/font]

[font=Lato, sans-serif]Colors’ Nayak aptly sums up the issue: “There is no doubts that digital will see growth at a phenomenal pace especially with Reliance Jio addressing the bandwidth and speed issues, but digital must be seen as another platform for delivering content and that's it. There will be lot of content consumption on digital platforms, but it will not be at the cost of (traditional) TV viewing.”[/font]

[font=Lato, sans-serif]Like Nayak, I too am ready to bet my bucks on linear or traditional TV in India. Digital has to travel many more miles in India before it can be a replacement for TV, which is still far off from near-saturation point or even plateauing off.[/font]

Discussion Is there a surge in price of mustard oil in the lockdown?