Sandeep Lamichhane has been appointed captain of the Nepal Cricket Team

Official Statement from Nepal Cricket Board 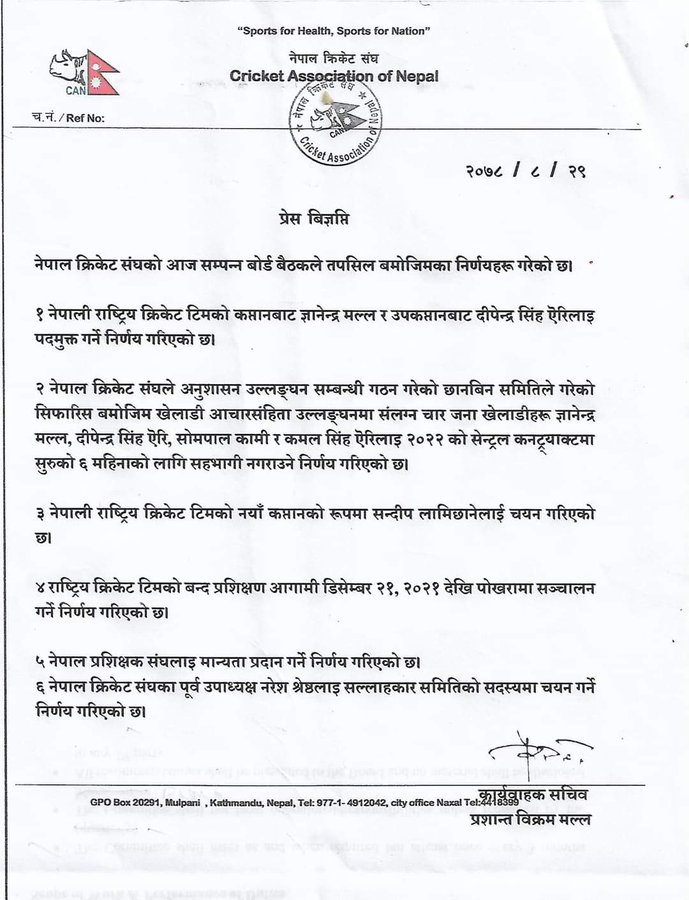 Translation of above photo

Press release
The board meeting of Nepal Cricket Association held today has made the decisions as per the details.

1) Gyanendra Malla as the captain and Dipendra Singh Airi as the vice-captain of the Nepali national cricket team
It has been decided to resign.

2) The Nepal Cricket Association has formed a committee to investigate the breach of discipline
Gyanendra, four players involved in violating the players' code of conduct as recommended
Malla, Dipendra Singh Airy, Sompal Kami and Kamal Singh Airy in 2022 Central Contract
It has been decided not to participate for the first 6 months.

4) Closed training of 4 national cricket teams will be conducted in Pokhara from December 21, 2021

5) It has been decided to give recognition to the Nepal Instructors Association.

@Yashvardhan Jain, kindly do not create threads in a hurry to became the first poster. We do not allow such kind of postings.

Your thread title is incomplete.
Y

Bapun Raz said:
@Yashvardhan Jain, kindly do not create threads in a hurry to became the first poster. We do not allow such kind of postings.

Ok Bro. Sorry for the inconveniences caused. I have done the correction and also added the translation