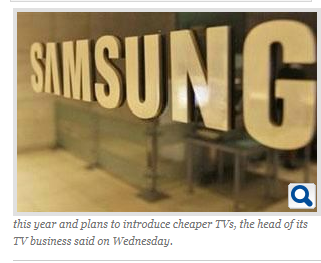 SEOUL: Samsung Electronics Co, the world's top television manufacturer, has seen TV sales firming up so far this year and plans to introduce cheaper TVs, as demand for lower-end models increase, the head of its TV business said on Wednesday.

Demand for lower-end TVs has been on the rise in recent months as major South Korean retailers such as E-Mart Co introduced flat-screen models that are as much as 40 percent cheaper through alliances with small local manufacturers.

"We've been preparing to introduce cheap models and have been studying to optimise production costs and retail prices. Those (cheap) models will be ready for sale in one or two months."

Samsung, the most profitable TV maker, also introduced on Wednesday its highest-end premium set that it hopes will help boost profitability, as a fragile global economy threatens to sap demand growth this year after no growth in 2010.

The ES8000 model has voice, motion and face recognition functions, as well as 3D and Internet-enabled capabilities. The models, available in sizes of between 46 and 65 inches, will go on sale from this weekend in South Korea before a global launch in March.

Kim said Samsung's TV sales so far this year have been stronger than a year ago and demand from China remained solid.

Samsung has gained market share in recent years from the traditional TV majors such as Sony Corp, Panasonic Corp and Sharp Corp which have struggled with a soaring Japanese yen and less competitive product line-ups.

Together, Panasonic, Sony and Sharp expect to lose $17 billion this year, highlighting the saving of Japan's electronics industry by foreign rivals like Samsung, weak demand and a strong yen.

Still Japan remains the sole market where Samsung has failed to gain traction in TVs and Samsung said on Wednesday it will further review business feasibility before deciding to get into the market.

Samsung, which sold around 43 million flat-screen TVs last year, aims to sell 50 million TVs this year with half the shipments Internet-enabled.
Click to expand...