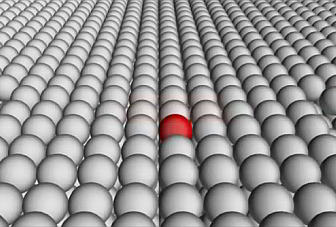 A team of researchers at University of New South Wales have created what they call a “perfect” single atom transistor, ushering in the way for smaller, more efficient and faster electronics. The team says it is able to build single-atom transistors precisely and reliably, using an atom-by-atom method instead of the current top-down method.

The same team had worked out how to create single-atom transistors recently, publishing their findings in January. The new method gives unprecedented control and reliability however, good enough for industry manufacturing standards.

A single phosphorous atom is placed onto a silicon wafer, using scanning tunnelling microscope (SMT) and hydrogen-resist lithography. Specifically, the silicon wafer is coated in hydrogen, and individual atoms are removed using STM. The wafer is then coated with phosphene, placing atoms in the places where hydrogen was removed. The single-atom transistor features a single red phosphorous atom, and has electrical leads for control gates and electrodes.

Previous single-atom transistors have had a margin of error of approximately 10 nm, which while small, is enough to affect overall functionality. The precise individual position of the new method will help use the transistor as a future qubit (quantum bit). For precise control at the quantum level, atomic precision is required for control gates and electrodes. Martin Fuechsle, one of the lead authors of the paper published in Nature Nanotechnology, says the method can also be automated.

"The thing that's unique about the work that we've done is that we have, with atomic precision, positioned this single atom within our device. Our group has proved that it is really possible to position one phosphorus atom in a silicon environment--exactly as we need it--with near-atomic precision, and at the same time register gates."

"This individual position (of a phosphorus atom in silicon) is really important...because it turns out that if you want to have precise control at this level, you need to position individual atoms with atomic precision with respect to control gates and electrodes."

Professor Michelle Simmons, the project’s group leader, commented on the importance of the findings:

"This is the first time that anyone has shown control of an atom in a substrate with this level of accuracy."

WoW....wonder if this could be used in our lifetime !