Qualcomm's March into the Gaming Market 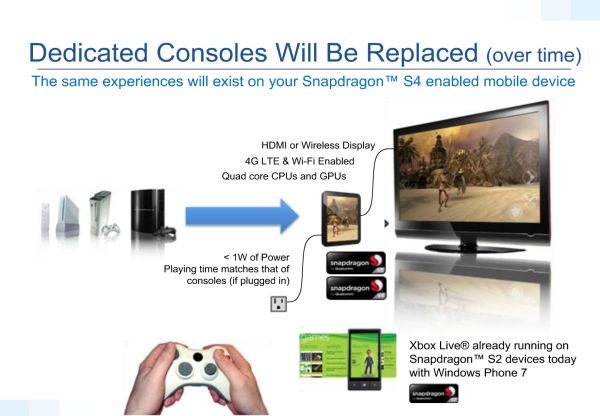 We've mentioned before that the next-generation of mobile, particularly tablet, SoCs are supposed to give us performance equal to or greater than current generation gaming consoles (e.g. Xbox 360, PlayStation 3). In a presentation today, Qualcomm took that message one step further and proclaimed that as a result of the improvements in mobile SoCs going forward we'll see a move from console and PC gaming to mobile based gaming.

The vision is pretty clear: take a smartphone or tablet based around a high end SoC (think Krait powered Snapdragon S4), plug it into the wall and tether it to a display (either wirelessly or via HDMI) and you've got a portable console. Qualcomm is committed to delivering both the hardware and the software support needed to bring developers to these mobile platforms.

I've heard a similar vision from all of the major players in the SoC space, including those with traditional PC roots. Just like many view mainstream computing as moving into the tethered mobile space, I can see mainstream gaming make a similar move.

It's not going to be a transition overnight. Mobile games still sell for far less than their relatives on PCs and consoles, which is a big barrier to getting AAA titles on these platforms.

PCs and consoles will likely stick around (or merge) for the long term though. High end GPU development isn't stopping anytime soon and we still don't have ultra realistic holodeck-like games, the first generation of which will be powered by high-end, non-mobile GPUs.