Review: Breathing down GTX 560 Ti's neck
With the company’s launch of Geforce GTX 560, Nvidia expanded its performance segment offer quite nicely. The GTX 560 can be found at €150, while the GTX 560 Ti is available for €30 more, here.

Both cards were classified as so called ‘gamers’ sweet spot’, meaning that gamers on average budgets will love it and should be pleased with the performance offered. Optimum gaming resolution is 1680x1050, although 1920x1080 is possible as well, albeit after sacrificing some detail settings.
Thankfully, there’s always the option to overclock the card and allow for smooth 1920x1080 gaming ad Point of View/TGT did exactly that. In fact, PoV/TGT pushed the GTX 560 Ultra Charged Edition’s GPU from reference 810MHz to as high as 900MHz.
GTX 560 cards are built around the GF114 GPU. Compared to the GF114 on GTX 560 Ti cards, the GTX 560’s GF114 comes with one Shader-cluster less. By disabling the Shader-cluster, GTX 560 practically got the same specs as the GTX 460 (GF104): 336 shaders or CUDA processors, 32 ROPs, 56 TMUs and 256-bit memory interface. Hardware wise, it’s the same configuration but the GTX 560’s GPU is 135MHz faster and its memory is faster by 100MHz (400MHz effectively) than GTX 460’s.
Thanks to the improved GPU design, Nvidia could clock the GF114 much higher than GTX 460’s clocks, all the while keeping consumption at the same level. 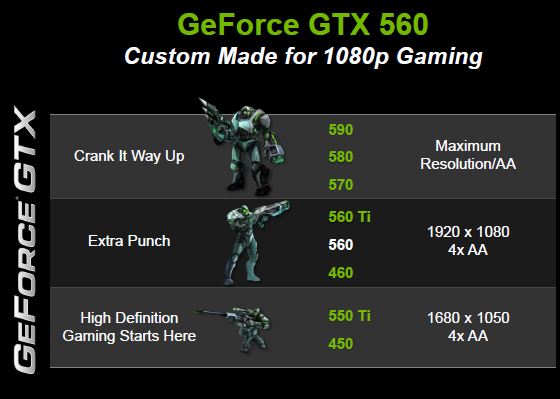